Table and salon lamps, unlike the simpler kerosene/paraffin lamps such as kitchen lamps, hand lamps, etc., always had a matching shade. The shade not only completed the look of a lamp, it also dimmed the light from the flame, creating a homely, sometimes romantic atmosphere. The human eye enjoys the indirect illumination of a lamp more than the direct, unfiltered light of a light source, with the possible exception of candlelight. This gives the shade a double role: it completes the appearance of the lamp and creates a very pleasant light. Consequently, lampshades were made in a wide variety of shapes and sizes, but also from different materials suitable for use as shades. For the safe attachment of these shades to the lamps, special shade holders or supports were needed, which were almost always made of brass.

Most lamps on eBay are offered without a shade because the shade is either broken or lost. Another reason for the lack of shades is the tendency of dealers to always sell shades separately, as this would generate a higher profit. Be that as it may, one of the most interesting tasks of the lamp collector is to look for the shade matching the style and size of his lamp.

There are shades made of very different materials. By far the most commonly used material is glass in every shape and colour, as it is the ideal medium for a shade due to its transparency and manifold possibilities for decoration. However, there were also shades made of printed cardboard as a cheap, unbreakable version of glass. A highlight of shade design consisted of very large, opulent silk shades lavishly decorated with lace and ribbons for large salon lamps. Glass shades suitable for such prestigious lamps were also decorated with fabric borders or glass fringes. Shades made of sheet brass appeared in the Art Nouveau period and were popular for their coloured, small glass inserts. A very charming, but unfortunately also extremely rare type of shade is the lithophane shade made of bisque porcelain. These shades are described in detail in the subchapter Other Shades.

Shades for kerosene/paraffin lamps can be divided into three large groups:

a) Glass shades with a wide bottom opening, which are placed in suitable shade holders (Vesta and Rochester shades)
b) Glass shades with a small bottom opening, which are held in small globe holders (ball, tulip and Paris shades)
c) Other shades that do not belong to the two groups above. These include, for example, shades that are not set up but hung in suitable holders, or shades that are made of other materials.

I will present these three groups in individual sub-chapters.

There are actually great similarities in this respect between glass chimneys and almost all glass shades: Tulip and ball shades, Paris and Vesta shades have a vertical-cylindrical lower rim, only about 1 cm high, designed to fit exactly into the metallic shade holder of the same size. Rochester shades – in analogy to shoulder, Kosmos and bottle-shaped chimneys - do not have an extra shaped fitter. Their lower rim acts as a fitter on these shades. Older ball shades for Moderator lamps and some gas lamp shades also belong to this class. With these latter shades, it is not possible to measure the outer diameter. Here, only the inner diameter of the opening is given.

There are ball and tulip shades, which do not have a cylindrical fitter but one that is slightly "lipped" outwards. These shades are mostly designed for electric lamps, where they are held in place by their fitter in the lamp's electric socket with small screws. There are also shades with a lipped fitter, which are just as well used for kerosene/paraffin lamps. The glass shades from the French glass manufacturer Vianne belong to this class.

The fitter width is understandably the relevant size for glass shades, because it characterises the size class of the shade and thus also the size of the shade holder that must be used. All size specifications (in mm) in the following sub-chapters refer exclusively to the fitter width. 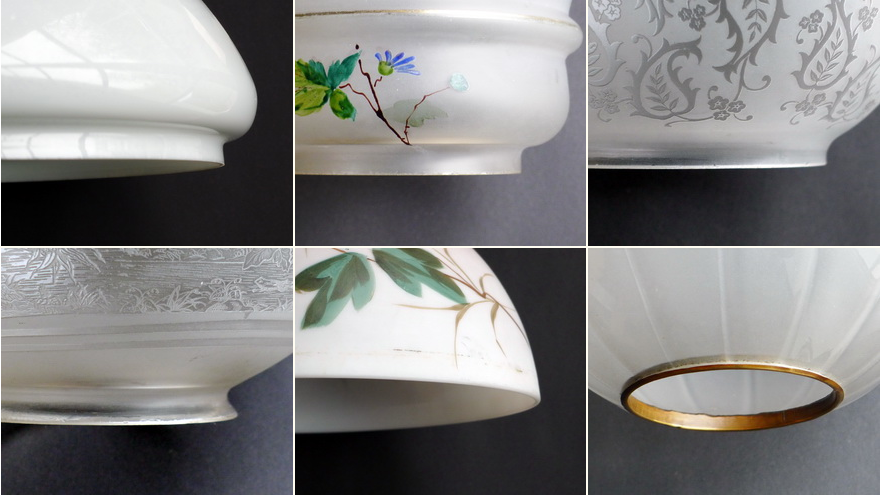