The Characteristics of Typical British Lamps

Now we come to a completely different style, which is quite distinct from the continental variety of styles. Be it because of their "insularity", be it due to their distinguished and reserved character, the British have created their own style of lamps and have very successfully fended off continental influence. This began very early with the development of the Duplex burner from a simple flat burner, and with subsequent improvements to the Vienna chimney by giving it an oval cross-section. Thus two strong distinguishing features were already born. But as if these were not enough, the British also developed very distinctive lamp shapes.

One distinguishing feature of British lamps compared to German or Austrian lamps is that they use almost no zinc casting. Among my 41 lamps from Great Britain, only one is made of cast zinc, and that is probably because it is a figural lamp (L.311). The most commonly used metal is brass, followed by cast iron for the pyramidal bases.

The typical, simpler kerosene/paraffin lamps of the British consist of a pyramid-shaped cast iron base that is square in the base. This foot shape exists only in Great Britain. The casting is usually decoratively executed, adorned with a wide variety of motifs, and depending on the artistic standard, also ornamentally pierced. These cast-iron feet are relatively large, so that no further columns were needed to raise the lamp, and they are usually painted black. On this pyramidal base, a kerosene/paraffin tank is screwed on, usually made of coloured milk glass. This font can be made of unicoloured but ornamentally embossed pressed glass, or of mould-blown glass that is colourfully painted. The shade is almost always a ball shade of colourless glass, but finely etched with stylised flowers and other ornamentation. Another frequently found version is the so-called "beehive" glass shade as a variation of the round ball shade, which here has the shape of an old beehive.

Later, these cast-iron feet were replaced by round, heavy stoneware bases, which have a relatively large diameter and are stepped. They are similar in appearance to the wooden bases of the French sculptural lamps, but are wider and much heavier. These ceramic feet are glossy black glazed; much rarer are other glaze colours. Usually a short, often ornamentally embossed or punched column of sheet brass sits on this ceramic base, which in turn supports the screwed-on kerosene/paraffin font. This font can now be made of glass as described above, or also of brass. These lamps also very often have the colourless ball shades. 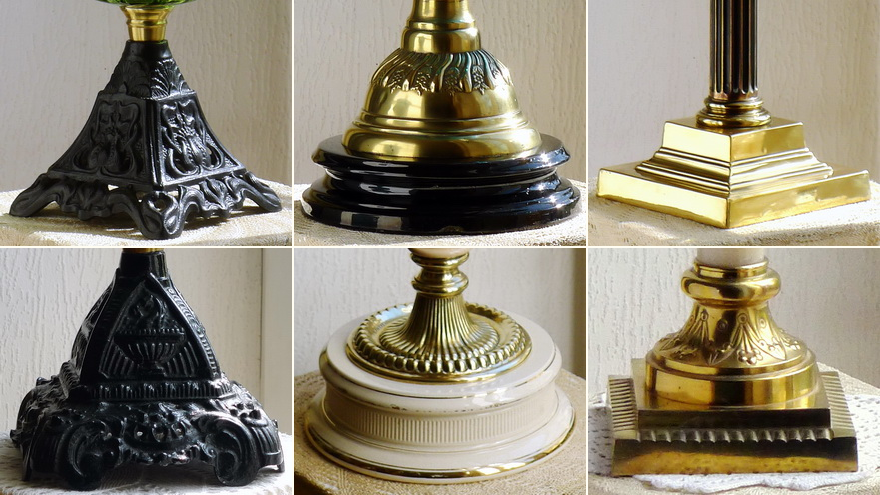 The third type of typical British lamp is an elegant, high pillar lamp with a distinguished, restrained ornamentation. The base of these column lamps is often kept very simple; it consists of a square, smooth brass sheet without any ornamentation, albeit stepped, or sparsly ornamented brass casting. The column is often made of vertically ribbed sheet brass, which also very often has an elaborately cast Corinthian capital at the top. The finish is always solid and of heavy quality, sometimes entirely silver-plated. Other variants have a marble column instead of a brass column. The font is screwed onto the Corinthian capital, which is now preferably made of colourless, but elegantly cut crystal glass. The shade for these elegant pillar lamps is often an equally elegant, finely etched glass tulip, the upper edge of which is imaginatively wavy and coloured. As mentioned in the chapter on lampshades, the preferred colour is the so-called "cranberry" colour, which in German can be described roughly as a rich dark pink or a crimson red. These tulip shades reach very high prices on British eBay. Of course, you can also use the finely etched but colourless ball shades instead of tulips. However, the lamp then appears somewhat colourless and boring. 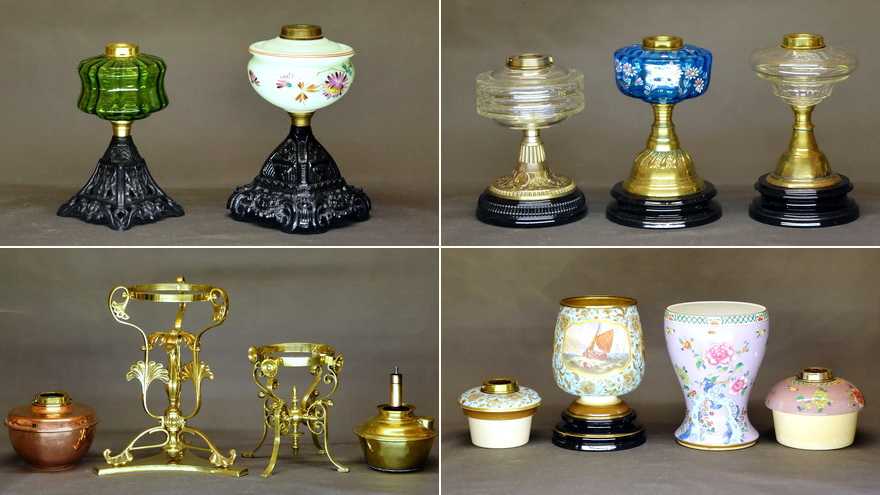 Another very British type of lamp is the "Arts & Crafts" style lamp made of brass. This art movement emerged in Britain in the second half of the 19th century as a protest movement against the industrialised uniform design of many everyday objects. Arts & Crafts can also be seen as a forerunner and a precursor of the Art Nouveau style that later took hold throughout Europe. The lamps in Arts & Crafts style are characterised by elaborate and filigree lamp frames made of brass rods, which carry the font made of copper or brass on top. A very famous representative of this movement was the designer WAS Benson, whose lamps are now very sought-after and therefore high-priced rarities. I do not have a Benson lamp in my collection.

Again, lamps made of ceramics or porcelain occupy a special position. Since Wedgwood introduced high-quality earthenware in the mid-18th century, the British ceramics industry has experienced a real boom. There are many ceramic producers, some of them world-famous, such as Royal Doulton, who have contributed first-class lamp parts to the lamp industry. These lamps often consist of a ceramic vase and a ceramic font to be inserted.

Among the porcelain manufacturers, one should mention Moore Brothers, Spode Copeland or Royal Worcester, who had very high-quality porcelain lamps in their programme. Moore Brothers in particular created a completely unique style with their porcelain lamps as a combination of white, unpainted putti and coloured plants (see lamps L.205 and L.252).

Needless to say, almost all British lamps have a Duplex burner. The burners of the stately elegant pillar lamps, whose metal parts are silver-plated, are also silver-plated. Another distinctive feature of British lamps is that all fonts, whether glass or brass, are threaded at the bottom of their metal undermount and therefore screw onto the column. The thread sizes are often the same (usually 21, 22 or 23 mm in diameter) so that fonts are easily interchangeable.

The British lamp and burner manufacturers I know are listed in the next table.

It is striking that the vast majority of British producers were based in Birmingham. The most important, straightforwardly epoch-making British company is undoubtedly Hinks & Son. This highly innovative firm invented the typical British Duplex burner, the bayonet connection, the oval-bellied Duplex chimney, the gallery lifter and flame extinguisher, paving the way for the long-standing success of the British Duplex burner. The Hinks burners were additionally installed in very many lamps of other lamp manufacturers. The lamps of this company are also of very high quality. Seen in this light, there is a well-founded parallel between the German Wild & Wessel and the English Hinks & Son. But there are also very high quality lamps from other English lamp producers, such as Messenger, Evered, Veritas.

My lamps from Great Britain

British lamps are relatively easy to identify - if only because of their Duplex burner. Also the typical British base shapes like pyramid bases made of cast iron or stoneware bases made of very dense, heavy ceramics are sure identification aids. Nevertheless, I do not have comparatively as many British lamps as I have from France or Germany. The reason is that the good, collectible British lamps fetch much higher prices and are therefore quite expensive, because the British themselves are passionate antique collectors and drive up auction results. However, if one looks at the quality of the lamps, one will well understand the collectability and consequently the price worthiness of these lamps.

I present the 41 British lamps in the collection in three sub-chapters:

1. Lamps mainly made of brass
2. Lamps made of porcelain, glass and ceramics
3. Lamps made from different materials