In the previous chapter, different types of kerosene/paraffin burners were described. For these burner types, different types of glass chimneys were also developed to achieve the optimum of flame brightness. Here in this chapter I will describe the different glass chimneys with their typical characteristics, and relate them to the correct burner types, because this is one of the most common mistakes made in the market with old kerosene/paraffin lamps.

The significance of the glass chimney, which is inserted directly into the gallery of the burner and thus completely encloses the flame of the burner, can be seen immediately when the correct chimney is placed on an already lit burner: The dark (orange-reddish) burning, sooty flame becomes instantly lower, but brighter and more radiant; and the sooting stops immediately! The effect of the much better flame comes from the much stronger air supply to the flame produced by the chimney effect of the glass chimney. As is well known, the warmer air rises; and the really hot air from the burner flame literally flies up through the narrow chimney and immediately creates a powerful draft of air from below upwards, bringing larger quantities of fresh air to the flame.

Consequently, each burner needs a suitable glass chimney in order to burn optimally, i.e. still, bright and soot-free. But since burners have different stages of development and differ greatly in size and type, they also need differently shaped glass chimneys adapted to each burner in order to develop their flame in the most optimal way. One must not forget that man's need for better, brighter light in the darker part of the day has grown stronger over the centuries. So it was also clear that every improvement, no matter how small, to increase the luminous efficacy of the kerosene/paraffin lamps was immediately exploited. In addition to the various conceptual improvements to the burners, the glass chimneys that go with them play an equally important role, because it is they that have the greatest influence on the air supply to the flame. Only the right combination of a burner with the right wick and with the glass chimney designed accordingly for this type of burner makes a satisfactory burning possible in every respect.

Unfortunately for us, countless lamps are offered with wrong chimneys. This is not only the case in eBay, but also in antique shops and auction houses, where one may assume a more serious handling of the offered goods. Here, too, ignorance plays an important role. A beautiful, expensive, handsome lamp that has a Kosmos burner but a Vienna chimney is simply an imposition, especially if the lamp is also advertised in the accompanying text as being "with the original chimney". More than two thirds of my lamps were offered with the wrong chimney, if they had a chimney at all!

It is therefore essential to know which chimney belongs to which lamp. Fortunately, old and newly manufactured glass chimneys of the most common types (Vienna, Kosmos and Matador chimneys) are still offered in great numbers, so that you can easily replace a wrong chimney with the right one.

The bottom part, the so called fitter of the glass chimneys is usually strictly cylindrical, so that one can simply insert the chimney into the prongs of the gallery. There are, however, some very rare exceptions where the fitter is not cylindrical but curved outwards in its lower end. This rare fitter kind is called a “lipped fitter”. Glass chimneys with a lipped fitter cannot simply be placed in a conventional burner gallery. These chimneys need specially adapted galleries without prongs, but with small screws on the side, which are screwed in so far that the previously inserted chimney is fixed in a tilt-proof way. A nice example of this type of chimney is the broad-bulged chimney made by the British lamp and burner manufacturer Young for his Victoria flat burner (see subchapter Chimneys for Flat Burners). A third collar variant is the so-called Loxon fitter in the glass chimneys for Aladdin incandescent lamps, where the chimney is fixed to the burner with a bayonet fitting. 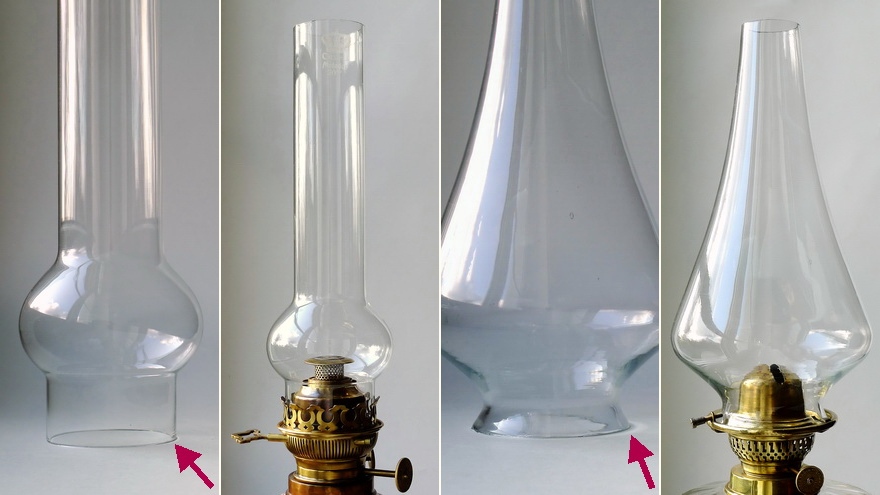 Characterisation of the Glass Chimneys

However, there are glass chimneys of different sizes within the same type, because their dimensions have to be adapted to the respective burner. Therefore, it is important for the characterisation to also specify the relevant dimensions of a chimney. First and foremost, this includes the fitter diameter, which immediately specifies which burner size this chimney fits. Secondly, the height of a chimney is important, because there are chimneys of different heights with the same fitter size. A third important parameter is the diameter of the bulge, if the chimney has a bulge. I will describe the relevance of just this size in the chapter Shades and shade holders. The Kosmos, Reform Kosmos, Shoulder and Bottle-shaped chimneys do not have a bulge that is wider than their fitter. On the other hand, the chimneys for flat burners and Matador chimneys have a bulge that is in any case wider than their fitter. 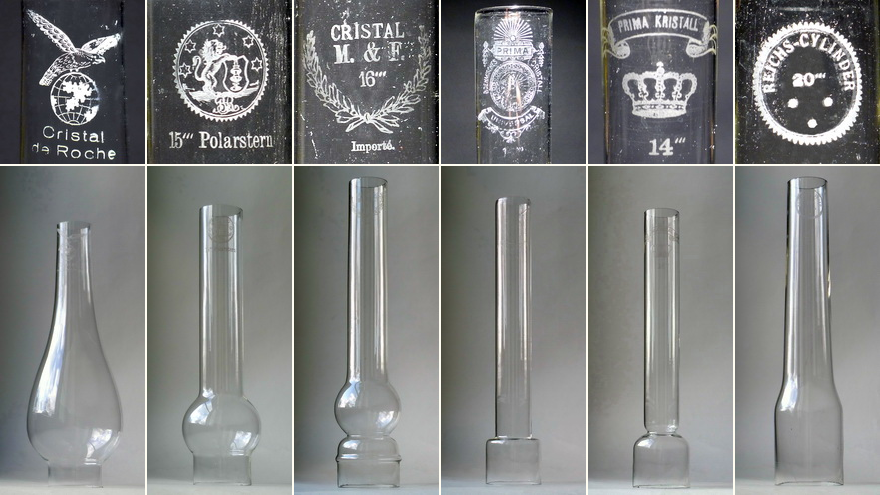 The most common glass chimneys with and without bulge (shown in their correct size ratio to each other - Top row: marks of the chimneys shown)
From left: 11’’’ Vienna chimney
15’’’ Matador chimney
16’’’ Central Vulkan chimney
16’’’ Shoulder chimney
14’’’ Kosmos chimney
20’’’ Bottle-shaped chimney

First of all, something very important: After only a few minutes, when you have lit a burner, the glass chimney that is placed on it becomes extremely hot. Touching it with bare fingers will immediately cause a bad skin burn. A chimney can only be touched again about 10-15 minutes after the burner has been extinguished.

The glass chimneys made after the middle of the 20th century are almost always made of borosilicate glass (also known as Pyrex glass or Jena glass), so they are very heat-resistant. The really old glass chimneys, on the other hand, are not very resistant to temperature changes. They can crack very easily if they get a cold draft from the side when hot, which can happen very easily if you use conventional kerosene/paraffin lamps for domestic use outside in the open air, e.g. on the balcony or in the garden. Glasses held too tightly in the gallery can also crack as a result of the burner's exposure of heat, as the material expansion of glass and brass over time can be different.

It is not a big problem if the fitter of a chimney is slightly smaller than that of the gallery (i.e. the diameter between the gallery prongs). You can gently bend these prongs inwards until the chimney has a secure stand. You should not try to force a chimney with a slightly larger fitter into a gallery; the danger of breaking the glass, especially if you also let this burner burn, is too great. Likewise, one should not try to use a chimney that is too small with a larger burner (e.g. with the next larger line size).

Dirty glass chimneys can be cleaned very easily with a narrow brush and some washing-up liquid from the inside and outside. However, there are also chimneys with stains on the inside wall that cannot be removed at all. This is a kind of glass plague, i.e. irreversible damage to the surface of the glass, the causes of which can be of quite different kinds. These glasses still do their job, just with a somewhat disturbed appearance.

And finally: Old glass chimneys bear a brand, a logo, a manufacturer's mark or similar on their upper part. This stamp is usually silkscreen printed or even just stamped. The white ink adheres only superficially, as the glass has no pores to absorb the ink.Mechanical friction (e.g. frequent washing and dry rubbing) removes this mark over time; only remnants that are just recognisable remain. Newly manufactured glass chimneys have no mark (exception: the original glass chimneys for Aladdin incandescent lamps are still marked accordingly). I try to use older glass cylinders with a visible mark in my lamps if possible, if I am lucky enough to find one in the right size.