Development of the Kerosene/Paraffin Lamp

Most of what is summarized in this chapter I owe to Dr. Touché. In his book “Leuchtende Vergangenheit = Luminous Past”, all stages of the development of artificial lighting are described in detail (see Literature and Sources).

According to a very general definition, oils are liquids that are immiscible with water. On the one hand there are “fatty oils” that are obtained from plants (= vegetable oils such as olive oil, linseed oil) and animals (= animal oils such as cod liver oil); and on the other hand "mineral oils" contained in the fossil residues in the earth, for example petrol and its components. These two main groups were most of mankind's light sources until recently. There are other oils, such as the essential oils from plants for creating fragrances or for cosmetic purposes, but they are not used for lighting purposes. All these different types of oil have different chemical compositions; this means that they differ from one another in their application properties.

The traditional oil lamps used from antiquity to the 19th century burn mostly vegetable oil. Vegetable oils are those obtained from parts of plants, e.g. olive oil, sunflower oil, rapeseed oil, linseed oil, safflower oil, etc. In particular, olive oil, which has been available to humans for 2-3 thousand years, was used as a fuel in oil lamps. Long before vegetable oils were extracted, only animal fats and oils were burned in small containers with a wick. These lamps were, next to campfires, fireplaces, wood spills and torches, the only artificial sources of light for people. Initially, stones hollowed out in the form of small bowls or seashells served as oil containers and lamps; later, in the ancient times of the Hellenes and Romans, suitable lamps were made from terracotta, which consists of a more or less decorated hollow body with a small opening for the wick at the front. The flame gets the oxygen supply for combustion from the surrounding air ("outer air flow" in the following photo). 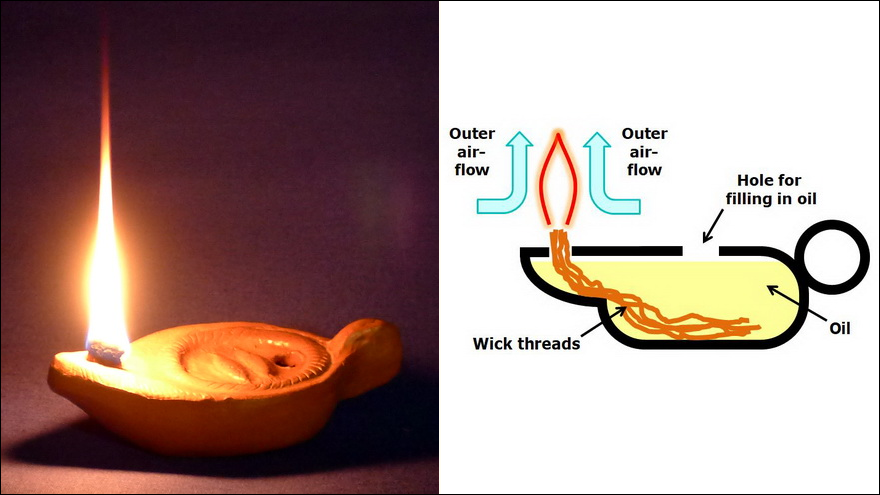 Luxury versions of oil lamps were finely ornate lamps cast in bronze, which probably only spread light in very wealthy houses. Oil lamps can also be found in use in our time, but much more as a sacred light in Orthodox churches and mosques that have retained this use.

Olive oil, representing all other vegetable and animal oils, is not flammable on its own; it needs a wick on which components of the oil can be heated, vaporized and burned. The wick is a simple structure made of thickly twisted cotton, linen or any other organic material. The end of the wick, tucked into a suitable piece of wood or cork, floats on the oil and can be lit directly there. The wick burns in immediate vicinity of the oil surface.

For centuries, vegetable and animal oils existed side by side as fuel in oil lamps. Wherever oil-producing plants could be cultivated, mainly vegetable oil was used, which probably also represented the far greater part of the oils used. In other areas, where vegetable oils were not available, one had to use fats from animals, which, however, if not cleaned, stank very badly and smoked profusely. These animal fats included tallow, which was more likely to be used to make candles because of its relatively rigid structure, and fats and oils from whales, which had been hunted since the 18th century and on a very large scale in the 19th century. The "whale oil" has helped several generations of people through the dark hours of the night, but has decimated the whale population in the oceans significantly.

The light emitted by the burning of the vegetable oils and animal fats in an oil lamp was not much better than the light of a candle. It was too faint to give good brightness and also smelled and sooted considerably, especially if the oils and fats to be burned were not sufficiently cleaned. Therefore, technical improvements were in need in order to make the flame of the oil lamp burn brighter.