Parts of a Kerosene/Paraffin Lamp

Strictly speaking, a kerosene/paraffin lamp needs only three parts to function as intended: a fuel tank, a burner with wick and a glass chimney. With these three obligatory parts, a kerosene/paraffin lamp can burn with a bright, soot-free flame and illuminate the room. The other parts such as bases, vases and shades are in themselves only accessories that do not contribute essentially to the functioning. But these accessories with their manifold shapes and colours are what make up an attractive, beautiful and interesting looking lamp, which then also becomes a collector's item. Consequently, we must consider these parts as components of a lamp and describe them as such.

In the next picture I have shown three lamps. The first two are examples of extremely simple lamps that were used as low-cost working lamps in millions of households. The only ornament on the left lamp is a handle, on the middle lamp a mirror reflector. The right lamp, as the stark opposite, has all conceivable ornamentation. It also has an expensive glass shade. However, all these unnecessary parts and ornaments have made it what makes salon lamp collectors' hearts beat faster. 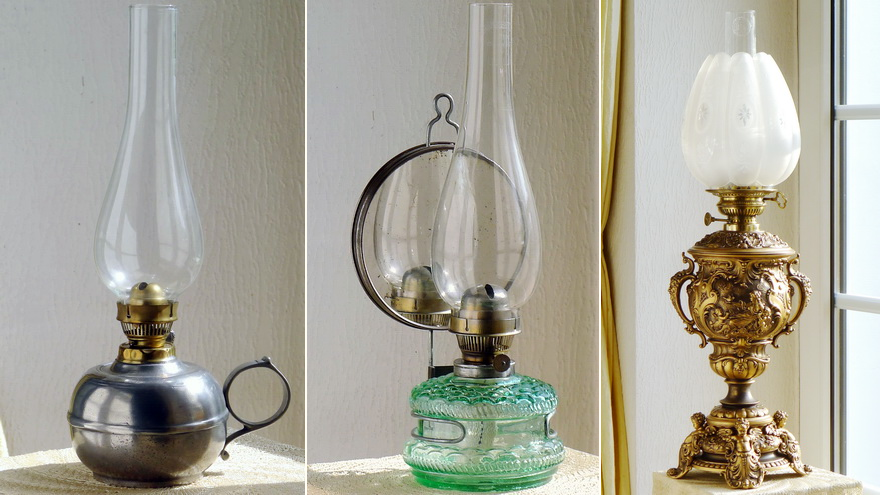 If you now look at table and salon lamps made for domestic use (other lamps such as wall lamps, piano lamps, student lamps, hanging lamps and floor lamps are not included here!), then you can quite clearly classify their individual components and their general shapes. A typical kerosene/paraffin lamp in this category often consists of the following parts when the lamp is viewed from bottom to top:

1. Base, often made of heavy metal, more rarely of stone or ceramic, so that the lamp can stand upright.

2. Central part between the base and the font, which in many cases is a column or a hollow vase-like vessel or even some kind of figurative sculpture.

3. Font (also known as reservoir) for filling with kerosene/paraffin, either visible or concealed.

4. Collar made of brass sheet, fixed firmly on the visible font or on the font lid to screw the burner into it.

5. Burner with one or more wicks, almost always made of brass sheet, sometimes with a special flame disc on top.

6. Glass chimney, which should fit the burner in size and shape.

7. Shade holder made of metal, which is usually attached to the burner.

8. Shade, usually made of glass, more rarely of metal, fabric or paper.

There are also other parts of the lamp other than those listed above, but these are not found in all lamps:

9. Connector, usually formed from simple brass sheet and placed between a base and a central part to join these parts together in a stable manner.

10. Threaded rod to firmly connect the parts of a lamp that are composed of several different parts.

11. Additional bowl, usually made of sheet brass, placed inside the vase if the hidden font is made of glass and therefore does not offer the possibility of soldering a nut for the threaded rod to it.

12. Metal undermount, usually made of brass, on the bottom of a visibly mounted font, to fix it to the central part of the lamp.

13. Font lid for hidden fonts, often made of metal or ceramic and decorated to match the vase.

14. Metal vase ring on some high quality lamps to increase the decorative effect.

The first three parts, i.e. base, font and the central part in between, together form the so-called lamp body. These are the basic parts of a table lamp, which in many cases belong together originally, i.e. they are not interchangeable at will, with the exception of the font, if the construction of the lamp allows for subsequent replacement at all. There are lamps of mostly smaller size whose lamp body consists of a single part, i.e. the lamp body consists of a single container which independently performs the functions of base, central part and font. Some lamps do not have a dedicated central part. With these lamps, the font is mounted directly on the base, sometimes with the small connector in between.

Here I will first describe these parts of a lamp body in their generally occurring forms and make a simple classification, without claiming to be complete. Burners, chimneys and shades with the necessary shade holders are described in separate chapters.