In contrast to oil lamps, kerosene/paraffin lamps do not burn vegetable oils, animal fats or other flammable liquids such as gasoline or alcohol, but only a special, highly purified fraction of crude oil. This purified fraction is called Petroleum in German. In American English, it is correctly spelled kerosene; but not to be confused with (German) Kerosin, the fuel used in today's jet planes, which in turn is a special mixture containing “kerosene” with precisely defined burning properties. The British term for kerosene as lamp fuel, on the other hand, is paraffin (not to be confused with paraffin oil, i.e. liquid mineral oil, or paraffin waxes for candles). Petroleum, paraffin and kerosene are used in different languages ​​for different substances and lead to considerable misunderstandings if they are not meticulously differentiated. So there are plenty of opportunities for linguistic confusion here:

Origin of the Crude Oil

The crude oil was created from organic material, from algae, plants and remains of dead small creatures that were concentrated and condensed in thick sediments. Millions of years ago, these sediments were trapped in huge caverns in the earth's interior by tectonic influences and transformed into crude oil under high pressure, high temperature and in an immeasurably long time through complex chemical steps. The chemical comparison is decisive for our consideration: the fatty vegetable and animal oils are fatty acids and fatty acid esters. In addition to carbon and hydrogen, they also contain considerable amounts of other chemical substances such as oxygen, nitrogen, sulphur, etc., such as those produced by the plant or the animal body itself. They are obtained by pressing or other processes and then cleaned, but not chemically changed. Kerosene/paraffin, on the other hand, consists of pure hydrocarbon chains (= carbon and hydrogen atoms bound together to long chains), ideally without any other chemical substances (for non-chemists: do not worry; you neither need to understand nor keep this in mind). Therefore, from a chemical point of view, kerosene/paraffin is something different from vegetable oils, and it also behaves differently.

Well, before we begin to speak about kerosene/paraffin lamps, I would like to briefly outline the historical development. There were of course earlier attempts to burn so-called "mineral oils", i.e. oils from mineral rocks such as coal, etc. instead of vegetable oils. There were even enough natural resources such as naphtha, bitumen or tar that could have been used. But these partly very viscous liquids burned very badly; they smoked and sooted terribly! Their similarity to vegetable or animal oils mostly consisted of their immiscibility with water; their burning properties, on the other hand, were really worse. These naturally occurring oily liquids were therefore no alternative to the most widely used vegetable oils.

The Luminous Oils from Solid Materials

In the 1830s, people began to separate "oily" components from solid materials such as hard coal, lignite, oil shale, even wood and peat, by means of distillation. Distillation is a chemical-physical process to separate a mixture of chemical substances with different boiling temperatures. The same procedure is used e.g. in the production of alcoholic beverages such as vodka, cognac or whiskey to separate the lower-boiling alcohol from the watery rest of the mash used. The liquids that were separated from the solids by distillation burned well and gave off a good light, which is why they were called luminous oils. From 1840 these luminous oils came on the market in large quantities under fanciful names such as "Photogen", "Hydrocarbure", "Solaroil" and were used in oil lamps for lighting purposes. Distillation from solid materials, however, was costly, and these novel fuel liquids were not yet completely free of soot. They couldn't push the vegetable oils out of the market.

And then the time came as petroleum (here in Anglo-Saxon meaning as “crude oil”) could be extracted from the earth in large quantities! Petroleum means nothing else than “stone oil”, with petra = stone in Greek and oleum = oil in Latin. Petroleum used to be the general term for crude oil, as crude oil was first seen flowing out of cracks in the stone on the surface of the earth. This designation has been retained for crude oil in English speaking nations to this day (see table above). In today's German usage, the word "Petroleum" is only used for a certain fraction of crude oil with best properties for illumination purposes. For this specific fraction other terms were introduced in American and British English. Thus “Petroleum” in German is “kerosene” in American English and “paraffin” in British English. I therefore write always “kerosene/paraffin” together because this website should serve all English speaking people.

Significant oil deposits were discovered in the USA in the middle of the 19th century. You only had to dig into the earth at certain points and oil gushed out! Since motor vehicles and airplanes had not yet been invented, attempts were made to make the petroleum, which was available in very large quantities and therefore dirt cheap, usable for other purposes. The separation of easily combustible fractions of crude oil, which are very suitable for lighting purposes, succeeded shortly afterwards through improved distillation processes. Ignacy Łukasiewicz from Poland received a patent at the end of 1853 for his distillative production of lamp oil from Galician oil (Galicia is a region in Poland with oil deposits).

A fraction is a specific component of a mixture. Crude oil, as it is extracted from the earth's interior, is a desolate mixture of the most varied chemical molecules, since the natural chemical transformation of the most diverse plants, plant parts and other organic materials can never produce completely uniform molecules. You have to break down the crude oil into its components in order to extract the various fractions from it, which serve very different purposes. So you can get almost waxy solid lubricants from crude oil as well as very thin light petrol. In between there are other fractions, all of which differ in their chemical and physical properties. Kerosene/paraffin is one of them, and was originally separated from other constituents of petroleum by distillation in order to possibly manufacture medicines with it. Kerosene/paraffin itself is not yet a chemically uniform product, but a mixture of hydrocarbon chains that have different lengths and therefore have different boiling temperatures even after distillation: Kerosene/paraffin boils in a fairly broad temperature range of 150-300°C. Because of this high boiling temperature, it has a low “vapor pressure”, as chemists would say, so it does not readily evaporate at normal room temperature. In the middle of the 19th century, shortly after 1850, when kerosene/paraffin could be separated from the other fractions and then cleaned properly, its excellent burning properties were recognized: kerosene/paraffin burned almost odourless, without soot, with a much brighter flame than previously known from vegetable oils, and very important: it crept up through the wick much easier!

For the first time in many, many centuries, a liquid was available that not only burned brightly, but also willingly crawled up the wick, and thus suddenly made the expensive pumping techniques unnecessary. One only had to change Argand’s burner slightly and adapt it to the new fuel; so you had a much cheaper version of the high-quality, but expensive Carcel and Moderator lamps! The triumphant advance of the kerosene/paraffin lamps began with some delay; because at the beginning there was not enough cleanly distilled kerosene/paraffin available. But soon afterwards, as petrol could be transported easily to distant distilleries and improved distillation processes made good and cheap kerosene/paraffin available in large quantities, the kerosene/paraffin lamp conquered the whole world as a new source of light.

One cannot therefore speak of an “invention” of the kerosene/paraffin lamp, but at most the question of who first thought of using the new crude oil fraction kerosene/paraffin as fuel in a lamp. And this honour is probably shared by two men who, quite independently of each other, separated kerosene/paraffin from crude oil by distillation and used it in specially built lamps: Samuel Martin Kier from the USA, who started his lamp oil by distillation in 1851 and marketed it under the name “Carbon Oil ”and probably also designed a special lamp for it (unfortunately without patents and other documents; therefore hardly known and undetectable), and Ignacy Łukasiewicz from Poland, the main developer of the Galician oil deposits in Poland, of whom a very simply constructed lamp is known (probably around 1852), which was not similar to later kerosene/paraffin lamps, but at least burned with kerosene/paraffin, which he was also able to separate from crude oil by distillation. A replica of his lamp can be seen in the Lamp Museum in Krosno, Poland.

It consists of two cylindrical metal vessels: The lower metal cylinder has the function of a kerosene/paraffin reservoir. The upper cylinder has several holes in the lower and upper area to ensure the external air supply to the flame. It functions more or less like a chimney. In addition, a rectangular opening had been created on the wall of the upper metal cylinder to direct the light of the flame to the outside. Between these metal cylinders is a thin ring that holds the relatively thick solid wick that dips into the lower kerosene/paraffin reservoir. 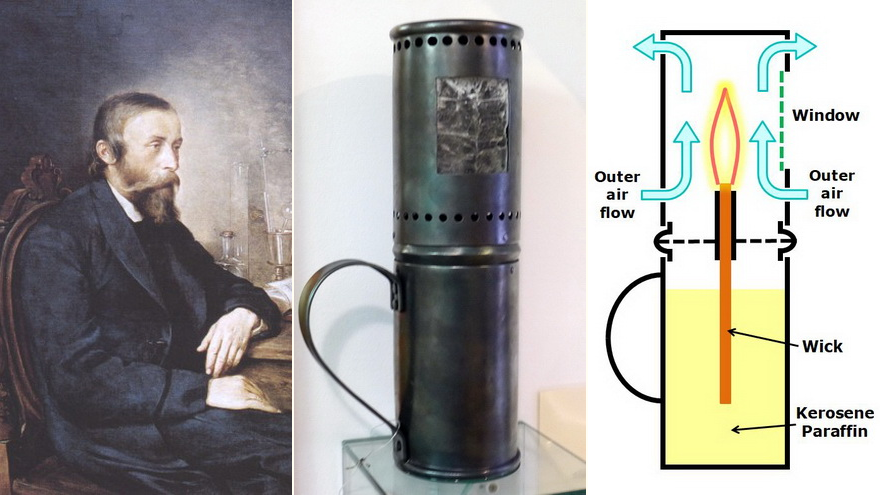 This design had neither a wick knob to regulate the wick height nor a glass chimney to intensify the air flows. Despite this archaic simplicity, in the summer of 1853, the operation room of the Lemberg Hospital (now Lviv in Ukraine) was so well lit with a lamp by Łukasiewicz that an appendectomy could be performed there. Afterwards, the hospital ordered several lamps from him. Łukasiewicz did not patent his lamp; traders in Lviv took care of the marketing.

This Polish lamp is the first historically transmitted and verifiably secured lamp that used kerosene/paraffin as fuel. The Polish invention thus was not the lamp itself, but the first and consistent use of the new fuel for lighting purposes in a lamp, and this really has to be recognized as a milestone in lamp development.

Back to the nomenclature: oil lamps and kerosene/paraffin lamps are fundamentally different types of lamps when you consider fuel. The former burn vegetable oil ("oil" in English), while the latter only burn "kerosene" in American English, "paraffin" in British English, That is why the kerosene/paraffin lamp has to be called correctly in English "kerosene lamp" (USA) or "paraffin lamp" (Great Britain), which is unfortunately never consistently maintained. English speaking nations say or write “oil lamp” without distinguishing between vegetable oil lamps and kerosene/paraffin lamps. Therefore, caution should be exercised when buying lamps from dealers, antique shops, auction houses, and especially on eBay. Only professionals know the difference! The effects are worse on eBay USA and eBay Great Britain: if you type in “kerosene lamp” in eBay USA or “paraffin lamp” in eBay UK as the search term, you won't even catch half of the kerosene/paraffin lamps on offer, as these terms are often not used. You inevitably have to search for “oil lamp”, with the result that thousands of oil lamps, both ancient and modern, also those which evaporate fragrance oils to improve the air in the room, are listed. "Oil lamp" as a generic term for all lamps that burn any liquids (not only to generate light) has become so firmly established in the Anglo-Saxon world that even passionate kerosene/paraffin lamp collectors refer to their lamps as "oil lamps", although they could really better distinguish.