Despite high shipping costs and additional 19% VAT at the German customs, I took the liberty to find some quite typical, some beautiful and rare lamps on eBay USA and to buy them at auction. Of course, in some cases where the prices went way up, I had to refrain from buying.

I deliberately avoided the simple pressed glass lamps from the early era of kerosene/paraffin lamps in the USA. They were far too simple for my collection. The colourfully painted "Gone with the wind" lamps also did not make it into my collection - with a few, incomplete exceptions - because European and American tastes diverge quite widely here. I would have liked to acquire a typical, large hanging lamp of the American type, but here the prices were beyond my budget. And of the market-dominating Aladdin lamps, I had a single, somewhat aesthetic-looking example, which I later removed from the collection, as I only want to collect pure kerosene/paraffin lamps of classic technique.

In my search for well-preserved American lamps, I have always made a point of buying non-electrified examples, as otherwise there is virtually no hope of procuring the missing parts of the burner. I have only allowed an exception in one case: L.314 is a mighty, very rare Delft-style lamp. It was electrified, but could easily be converted back, as the electric socket was quite simply soldered onto the actual burner. I had already inwardly prepared myself for possibly having to wait a very long time for the missing, special flame disc of the Matthews & Willard burner. Miraculously, after 2 weeks of purchasing the lamp, this very flame disc turned up on eBay USA!

Half of my American lamps are made up of center-draft lamps from the c. 1885-1900 era. With the exception of 5 lamps that came complete with their shades, I had to get the matching shades myself for all the other lamps. Almost all glass chimneys also had to be bought new; only two American chimneys are old and marked. 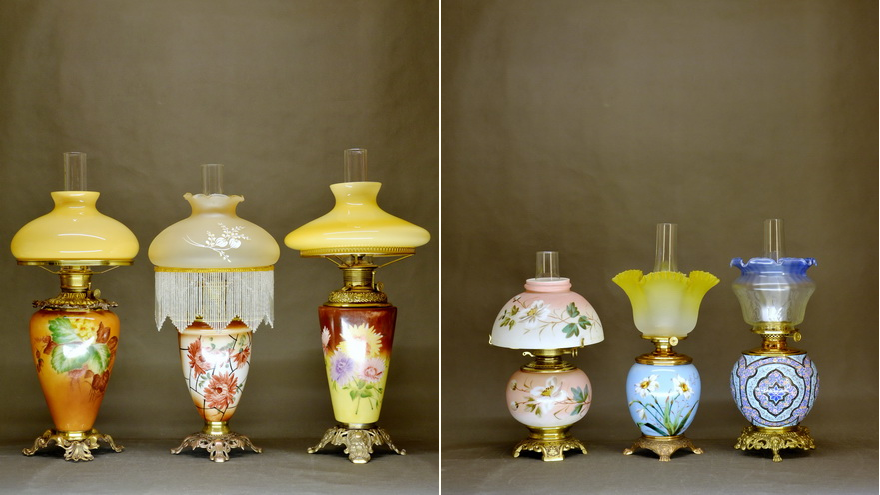 The first three lamps belong to the classic "Gone with the wind" lamps, but without their original shades. I had to complete these lamps with reasonably matching Vesta shades.

L.193 is a lamp from the glass manufacturer Fostoria with a large, painted glass vase. The 25 cm Vesta shade is also from USA. The central draft burner is made by Plume & Atwood for Fostoria.

L.080 is made by the Consolidated glass company. It was a wedding gift to a couple from Germany who had immigrated to the USA (according to the seller, whose grandparents were the wedding couple). I replaced the lost crystal hanging with a matching glass bead hanging. Again, the burner is from Plume & Atwood. The shade is from Germany.

I also had to complete the lamp L.233 from Bristol Glass & Clock Co. with a later shade from Vianne. The burner is original from Bristol. The shade holder is homemade by me.

L.141 is a typical American table lamp with the original shade, which is rare to find in its original, non-electrified form. The lamp has a large #3 Duplex burner by Plume & Atwood.

The lamp L.168 with beautifully painted daffodils was probably once the base of a "Gone with the wind" lamp; in my case it got an aesthetically well-fitting British tulip shade. Here a #3 flat burner from Plume & Atwood is on duty.

In the case of L.364 with its elaborately painted glass vase in the arabesque style from the famous "Moroccan Tapestry Design" series by the British glass manufacturer Thomas Webb, I had to put on a blue Vianne tulip shade so as not to disturb the colour harmony. The #3 flat burner is by Edward Miller. 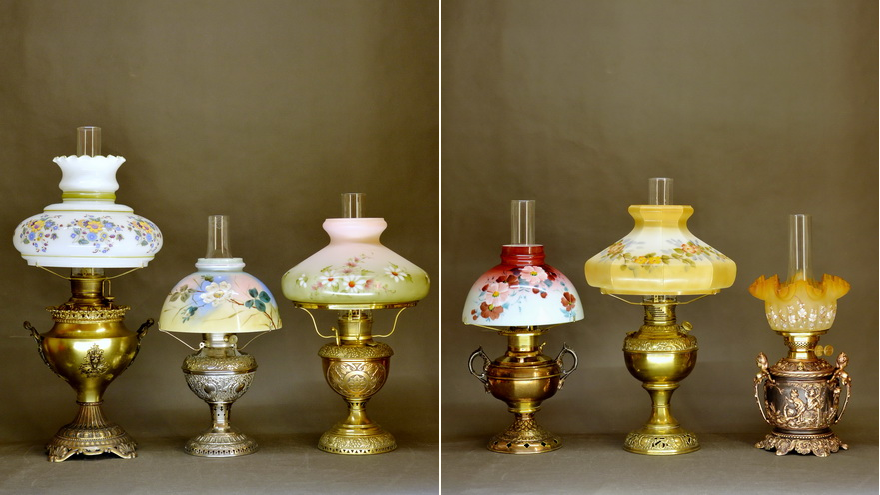 The mighty Miller Lamp L.079 is by E. Miller. It probably had a very large ball shade in the past. I have put on a correspondingly large Vesta shade here, which was probably produced for later hanging lamps. The #2 center-draft burner is of course by E. Miller.

The smaller, fully nickel-plated Vestal Lamp L.303 is also by E. Miller. I was able to fit this lamp with a beautifully painted old American Rochester shade. The glass chimney is the only marked American chimney for center-draft burners in my collection.

L.132 by Bradley & Hubbard got a hand-painted Vesta shade of relatively thick glass, probably from the mid-20th century. The lamp body is made in two colours (brass and copper).

Also designed with brass and copper in two colours, the lamp L.257 is by Rochester. The central draft burner is made by E. Miller for Rochester. The charmingly painted shade belongs to the old Rochester shades.

L.100 by Rochester bears the designation New Rochester Lamp and features an innovative wick drive with an angled wick knob. This burner is made for Rochester by Bridgeport Brass Co. The beautifully painted, heavy Vesta shade is believed to date from around the mid-20th century.

One of the most beautiful American lamps in my collection, to my mind, is the lamp L.153. The entire cast zinc lamp body is exuberantly decorated with many playing children. I have converted the electrified lamp to kerosene/paraffin lamp. A large Duplex burner from P&A and a charming gas lamp tulip shade from Great Britain are installed here.

L.124 is a very European-looking lamp, also very interesting in its construction, by the Hollings company in Boston. The cylindrical vase is by Gien from France; the burner is a regular Duplex burner by Wright & Butler from Great Britain. The English tulip shade suits the lamp very well as it repeats the floral motif of the vase (carnations) in a stylised way.

The second lamp, L.249, could again be entirely from Great Britain; it has nothing in common with typical US lamps. Nevertheless, it is from the USA. The fully silver-plated lamp (incl. Victor burner by Plume & Atwood) is marked Simpson, H. M., USA. This dainty, fine lamp was then given a fine glass globe by Baccarat, very appropriate in style.

The third lamp, L.355, is a typical representative of the transitional period from simple to luxurious lamps. It is a so-called composite lamp; a cast iron base and a cast zinc sculpture are combined with a glass font. The cast zinc figure of this lamp is illustrated in 1881 catalogue of E. Miller. The half-open gas lampshade is finely etched.

The three large American lamps in my collection are shown in the photo on the right. At the end of the 19th century, the demand of upper middle-class American households for very imposing lamps worthily demonstrating the immense wealth of their owners had risen sharply. In this time of affluence, large, opulently furnished lamps were created, which by their size alone dominated the room.

L.139 is a representative of the so-called "gone with the wind" lamps, but with pleasantly restrained, discreet painting and with a relatively rare, three-tiered construction of glass parts. The central draft burner is by Plume & Atwood.

The mighty L.314 is a ceramic lamp, painted with typical Delft motifs. The ceramic parts come from Great Britain; they bear the bottom mark of "Empire Porcelain Company, England" from 1896. The burner is a large center-draft burner from Matthews & Willard. I couldn't help but put a mighty 10 inch ball shade (from France!) on here.

Similarly grandiose, but almost European again, is the column lamp L.277 with a British tulip shade. From the extremely fine porcelain painting, I am even inclined to suspect that it could be an import from Great Britain. The porcelain marks at the bottom are mysteriously scratched out. I have used here a #3 Duplex burner by Holmen, Booth & Haydens from about 1888 (patent date). 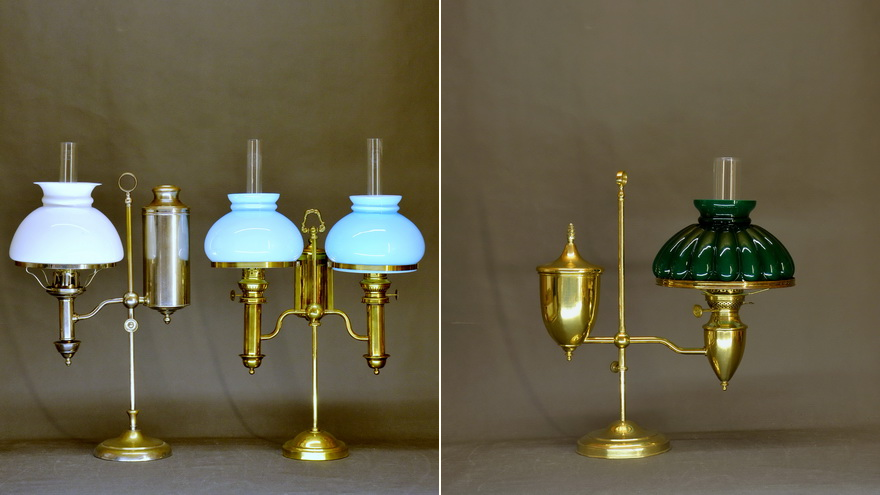 L.147 by Cleveland Non-Explosive Lamp Co. is a true copy of the reading lamps by C.A. Kleemann, which were very popular in the USA from the beginning. With these reading lamps, the wick is adjusted by turning the shade holder. The burner is an Argand burner for kerosene/paraffin, which flows from the lateral invert font to the burner. The Vesta shade is original.

The lamp L.170 is a double student lamp with a mysterious origin, because the burners are conventional Kosmos burners from German production. It could be that due to the great popularity of student lamps in the USA, a German producer made such lamps for USA. The kerosene/paraffin for both burners is supplied by the central invert font. The light blue Vesta shades are also original to this lamp.

The student lamp L.137 from the beginning of the 20th century is by E. Miller. The kerosene/paraffin supply is provided by the invert font on the side. The burner, however, is a Duplex burner by Plume & Atwood. The dark green Vesta shade in melon shape is original.