Lamps Made of Other Metals

Besides brass, which is used very often, there are also other metals that were used in British lamps. First and foremost is cast iron for the pyramid-shaped lamp bases and wrought iron for the floor lamps. In the Arts & Crafts period brass was often combined with copper. There are also a large number of distinguished table and pillar lamps made of brass or copper, which were subsequently silver-plated. 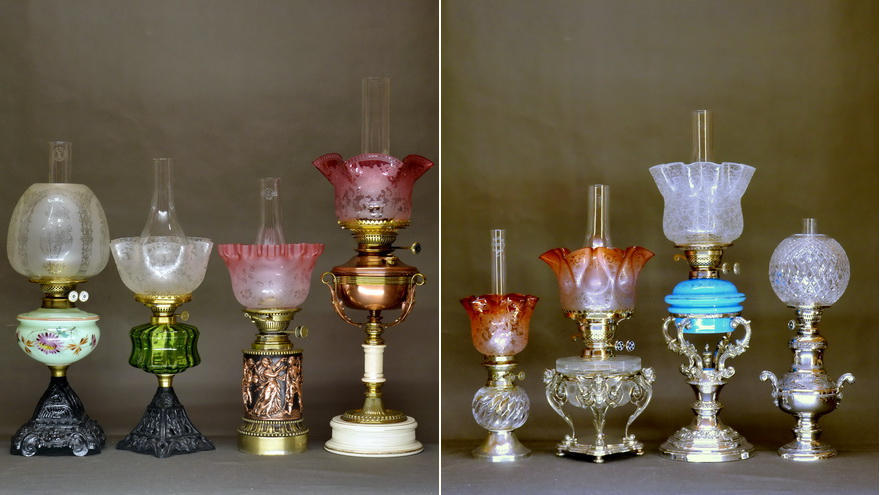 The first two lamps are fitted with the typical cast iron pyramid base. L.121 carries a real rarity: the Hinks burner from this lamp probably belongs to the oldest period of Duplex burners, because it has neither a thread nor a bayonet connection. This burner is simply inserted into the font collar. The "beehive" ball shade with the dragon motifs is also likely to be from the same period. L.341 is also an older lamp with a flat burner by Young. Here I took the liberty of putting on an American tulip shade for gas lamps.

The lamp L.157 is a special one, because it is a converted French Moderator lamp. It was probably once completely silver-plated, of which only traces remain. The vase wall of the lamp consists of a frieze on which Greek musicians are depicted. These scenes are taken from an antique Greek vase that is in the Louvre.

L.029 is an elaborately designed lamp in Arts & Crafts style. It is unusual because it has a large central air draft round burner from Sherwoods instead of the obligatory Duplex burner. The rare cream coloured base is connected to a fluted ceramic column. The copper font is simply plugged into the metal ring.

The small, inconspicuous lamp L.032 has a very simple silver-plated base by Hukin & Heath. Judging by the hallmark, it must have been made before 1879. The special feature of this lamp, however, is its 10''' Martin burner with two wicks.

L.117 is again a rare showpiece. This silver-plated lamp, stamped and dated Elkington & Co., March 1862, consists of a flat, quasi-square base bearing very elegantly shaped harpies at the four corners. Harpies are mythical creatures with a female torso and wings. These harpies carry a wide ring at the top, in which the large font made of cut crystal glass sits. The tulip shade is a very finely etched English gas tulip shade. I had the burner and the shade holder professionally silver plated.

L.279 is a fine example of heightened British refinement. This elaborately designed lamp is fully silver-plated. It must have been electrified earlier. The duplex burner is silver-plated by me.

Pillar Lamps and Other Household Lamps 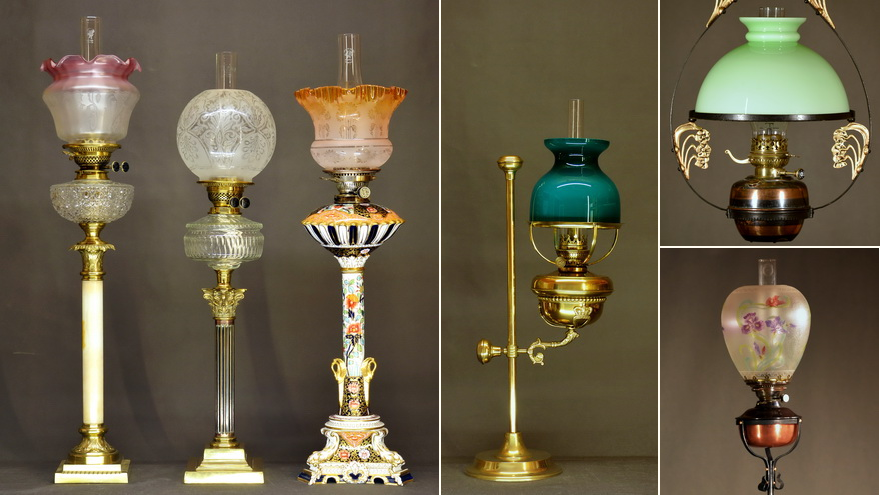 The first two lamps in the photo are typical British column lamps, distinguished in their form and fitted with crystal fonts. L.041 has a strictly cylindrical, white marble column and a font of pressed crystal glass. The shade is a Vianne tulip. L.108 is the best example of British pillar lamps with a vertically ribbed brass column and a completely unpretentious square brass base. The cut crystal font and the finely etched ball shade emphasise the lamp's noble, understated elegance.

A similarly tall column lamp, but made entirely of extremely detailed painted porcelain, is L.109, signed by the venerable porcelain manufacturer Spode Copeland. This lamp is a showpiece of magnificent elegance, and should also be a museum piece. It is completed with a tulip shade by Veritas in an excellent matching colour.

The reading lamp L.089, on the other hand, is a very simple but large lamp probably from the second half of the 20th century. The only decorative elements of the lamp are the cast iron font holder and the green lampshade for reading lamps.

The hanging lamp L.334 by Veritas, which is quite simple compared to continental European hanging lamps, has cast iron Art Nouveau elements in its wrought iron lyre. The burner is the Royal burner by Schwintzer & Gräff for Veritas.

The L.232 floor lamp is made of black lacquered wrought iron. The kerosene/paraffin tank is made of sheet copper. The extraordinarily shaped, painted glass shade is by the glass manufacture S. Reich in Vienna.