Lamps by Ignác Fischer and Zsolnay

The Kingdom of Hungary with its capital Budapest was part of the Austrian Dual Monarchy. Budapest was an up-and-coming, flourishing metropolis and competed with Vienna with its magnificent palaces and buildings. The Hungarian lamp manufacturer Lámpa-Gyár was founded in Budapest.

However, Hungary was to make a first-rate aesthetic contribution to the lamp industry with two other firms: the ceramic and porcelain manufactories Ignác Fischer in Budapest and Zsolnay in Pécs contributed very high-quality ceramic lamp parts to lamp production, especially in the late 19th century. Possibly these companies had even equipped the lamps themselves with the necessary metal mounts and burners; this would have to be found out at some point.

The lamps fitted with these ceramic parts were quite exclusive and were supplied to Vienna and other countries with a wealthy, discerning clientele. Lamps from both manufactories occasionally appear on eBay Great Britain; they are always traded at very high prices.

In my collection there are five larger lamps by Ignác Fischer. In contrast, I own only one small lamp by Zsolnay. I have not been able to acquire any more lamps by Zsolnay. 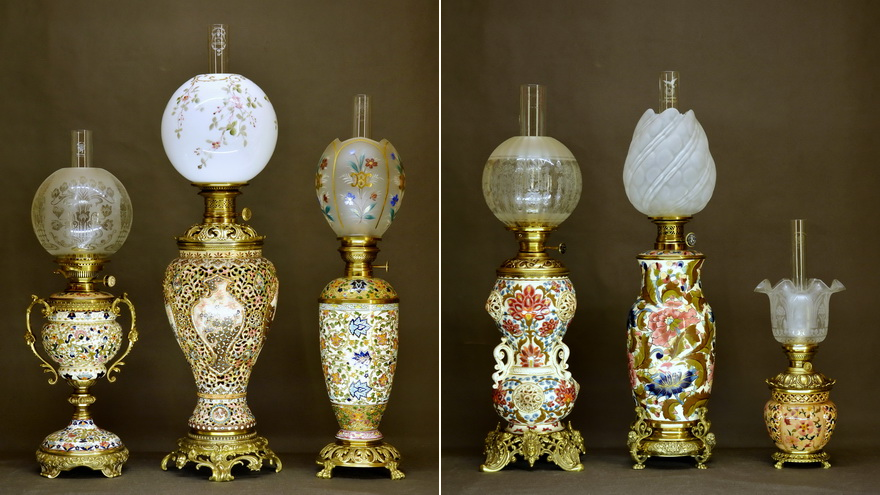 L.116 is an Ignác Fischer lamp that was destined for the UK; in fact it carries a bayonet font collar. I have completed it with a Hinks Duplex burner and a well-fitting ball shade.

I bought the Ignác Fischer lamp L.197 in an antique shop in Budapest. It was broken several times and glued together in a very amateurish way. In the hands of Mr Kühnel, it got its original, impeccable, radiant shape. This lamp got a 20’’’ Germania burner and a painted, matching tulip shade.

The mighty L.275 by Ignác Fischer in rare calabash shape is equipped with a 20’’’ Hugo burner. Already the extremely elaborate base made of cast brass underlines the value of this lamp. A British ball shade is placed here.

The lamp L.325 by Ignác Fischer is similarly large and of high quality, painted with large-format flowers very much in the later Zsolnay style. Here a 15’’’ Sonnenbrenner does its job. The large tulip shade has a diagonally moulded shape.

The Zsolnay lamp L.241 is quite inconspicuous in comparison. It was probably created from a normal vase by adding metal mounts afterwards. I left the Kosmos burner from SI Paris on it. The tulip shade is also French.

Further Lamps from Hungary and Bohemia

The next photo shows 2 more Hungarian lamps, a glass lamp with a Ditmar font and 3 lamps from Bohemia. 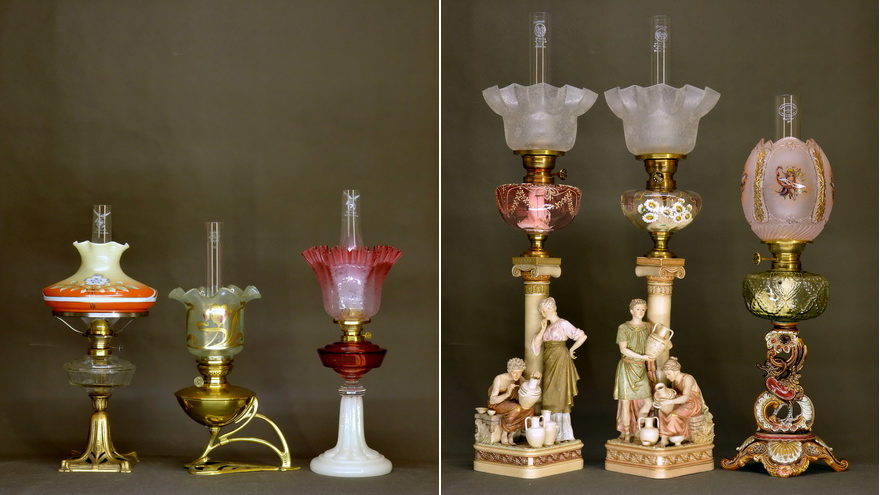 L.063 is a rather simple table lamp by Lámpa-Gyár with a cast iron base, faceted cut glass font and painted Art Nouveau shade by Schreiber & Neffen. The 11’’’ flat burner is by R. Ditmar.

The beautiful glass lamp L.181 has a cranberry-coloured glass font, which appears in both Ditmar and Lámpa Gyár catalogues. However, the lamp with its unusual glass base is not illustrated anywhere. Again, an 11’’’ flat burner from Ditmar is in service. The tulip shade with the matching colour came from France.

The three lamps in the photo on the right come from Bohemia. Bohemia (now the western part of the Czech Republic) was part of the Austrian Empire until the First World War. Prague, the capital, was the third major metropolis of the vast empire. However, I am not aware of any Bohemian lamp producers. Presumably, the Czechs met their lamp needs from both Berlin and Vienna.

The two large lamps L.177 and L.178 are made of very detailed porcelain bodies by Royal Dux Bohemia, offered as possible candlesticks in an auction house. I had seen one of them as a complete kerosene/paraffin lamp with matching porcelain font earlier on eBay UK (but it was also extremely expensive and out of reach for me!). I completed both lamps with my own means to make a delightful pair. L.177 is a three-dimensional transposition of a then very famous oil painting ("Kunst bringt Gunst") by the German painter Paul Thumann. L.178 was probably an independent design by Royal Dux Bohemia. Both lamps are extremely rare and also unique in this form.

The unusually colourful ceramic lamp L.321 is based on the base part of a large table vase from the Bohemian ceramic manufacturer Wilhelm Schiller & Sohn. Here, a mythological bird is embedded in a magnificent frame. The 20’’’ Hugo burner and the newly produced tulip shade from an old mould by S. Reich are my additions.