Some words about me

This information is sure not necessary to collect the kerosene/paraffin lamps, but I think it would be interesting to get to know the person behind this website and what made him start collecting.

My name is Harutyun Hanciogullari. By now you will know that I am not a native of Germany. Since my name is a tongue twister, all friends and acquaintances, including my family, have always called me "Arto" by the nickname. I was born in Istanbul in 1951 as the son of Armenian parents. After graduating from high school and studying engineering for two years in Istanbul, I came to Germany at the age of 20 to study chemistry, and since then I have named Germany my second home country. After studying, doing a doctorate and after long years of work in a large chemical company, I am now retired and can better concentrate on my collecting activities.

Collecting has fascinated and occupied me for most of my life. I can say I'm a collector out of passion, the kind who always has to collect something, be it just beautiful pebbles and shells on the beach. After initial collecting areas (postage stamps, cigarette boxes), when I was around 15-16 years old I came to a really nice collecting area as a schoolboy, which basically continues to this day; namely the collection of beautiful, valuable, old, antiquarian books. One can already guess that this area requires much larger financial resources than the amateurish collecting of postage stamps or even empty cigarette boxes. Old books beautifully bound in leather and illustrated with copper or steel engravings are not cheap. So it is understandable that this collecting area only really got going when I started working for my company as a newly graduated chemist.

My interest in old kerosene/paraffin lamps was awakened only a few years ago when I visited an old friend from Istanbul, Ara Kebapcioglu, in Paris in the summer of 2011.

Ara and I have known each other since our time together 1970-71 at the then American engineering college Robert College in Istanbul (now Bosporus University). He is an Armenian like me. We came to Germany together in 1971, after the student unrest in Istanbul, to study chemistry here in peace. But after a while our ways parted; he wanted to study in Frankfurt, whereas I wanted to study in Marburg. After a few years in Germany, he immigrated to Paris; and we've lost sight of each other for good.

And now, after 40 years, I wanted to visit Ara in Paris and show my second wife Maria Antonietta Paris, because she had never been to this beautiful city. It was a beautiful summer day in June 2011 when I parked my car in front of Ara's little shop in Paris. After an exuberant greeting, I went into his shop and could hardly breathe out of sheer fascination and enthusiasm! Ara runs a small but exclusive shop for old lamps (he had long since given up studying chemistry and made his field of interest his profession). His shop was overflowing with beautiful old lamps; the wooden shelves on the walls burst under lamps; the ceiling was barely visible from the hanging lamps. A few electrified lamps emitted a subdued light that was reflected hundreds of times by the other lamp bodies ... I imagined myself in a fairytale palace of 1001 Night stories, where wonderful, magical objects with their manifold, golden glittering colours immediately cast a spell over every visitor... At that moment, "Virus petrolensis" took possession of me, that is perfectly clear to me in retrospect. 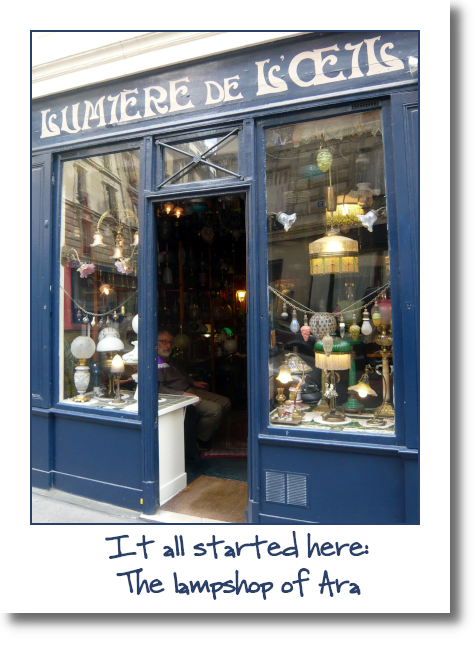 Shortly afterwards I started collecting kerosene/paraffin lamps. Completely unsuspecting at the beginning, I had to laboriously acquire the necessary knowledge, strain Ara's patience with hundreds of questions and pay a lot of money by buying the wrong lamps. But it was very worthwhile in other respects: I got to know other lamp collectors who have greatly enriched my social environment with their friendliness, helpfulness and generosity.

Exactly ten years have passed since then; and from June 2011 to June 2021 I collected exactly 365 kerosene/paraffin lamps, small and large, cheap and expensive, simple and richly equipped, but always beautiful kerosene/paraffin lamps for me! Why exactly 365 lamps? Well, this “magic” number (a lamp for each day of the year) signalled to me that I should stop now for good. After my 365th lamp (acquired in April 2018), I bought more lamps, but only to replace some of the lamps I bought much earlier, which no longer fit into this beautiful collection due to their very simple shape. But I would like to continue to stick to the total of 365. My collection is therefore celebrating its tenth anniversary now, in June 2021, and I am giving to my collection (and of course to me personally) this website as an anniversary gift!

What does a collector want with his collected beauties? Some collectors write books about their collections. Museums hold special exhibitions and issue exhibition catalogues. I also know collectors who have founded their very own lamp museums. In any case, the desire to make your own collected treasures available to other people is a decisive factor in such ventures. And I am one of those collectors who want to show their collectibles, their trophies, so that other people can admire them, appreciate their beauty, and appreciate their value. That is why I came up with the idea to make my lamps with their photos and history accessible to all people who are interested in kerosene/paraffin lamps on a website. Shortly afterwards I also wanted to provide information that could be helpful to interested beginners in this field of collection, just because useful literature or other sources are very rare. This is how this website was created.