These French terms stand for two ancient painting techniques with enamel colours on mainly metallic surfaces. They have both been generally known since the Middle Ages and are often used on artistically valuable objects. They look quite similar at first glance, although they are two fundamentally different techniques. Because of this similarity, they are often confused. Many art objects painted in champlevé technique are simply attributed to cloisonné technique by uninformed people, which is completely wrong.

Before we describe the two techniques with their basic differences, we must briefly explain the term enamel because enamel colours are used unchanged in both techniques.

Enamel is a glass-like coating on metallic and glass surfaces, which is irreversibly bonded to these surfaces by firing at high temperatures. This coating can be made in different colours, opaque or transparent by adding suitable inorganic components, depending on the technical, artistic and other requirements that the metal object treated in this way must meet.

Most people have several enamel-finished metal items in their household without realising it. For example, the inner walls of ovens and also oven trays are black or dark anthracite enamelled metal plates, because the glass-like surface of the enamel has a very high resistance to almost all substances. High-quality bathtubs and shower trays are also covered with a white enamel layer and are vastly superior to the more modern, colourful acrylic tubs due to their insensitivity and durability. Another example for everyday use are the white outer walls of refrigerators, washing machines, etc., which used to be covered with white enamel as well. Today, in the low-price segment, white paint is simply used instead of enamel.

To produce the enamel, different glass-forming substances that enable adhesion to the metal surface as well as colouring substances (silicates such as quartz sand, metal oxides, borax, feldspar, etc.) are mixed together in finely ground form, brought into a flowable form with water, applied to the surface to be enamelled and melted together at temperatures of 800-900°C. The metal surface covered in this way with a thin layer of glass is protected from corrosion.

The historically significant enamel works with coloured enamel can be found among the art objects. Enamel coating is an ancient technique. The oldest enamel work found is 3500 years old (burial object in Cyprus). Enamelled art objects made of gold are known from ancient Egypt. The Celts filled the incised furrows of their jewellery with red enamel. However, the high point of artistically very valuable enamel work began with the sophisticated techniques of cloisonné and champlevé in the Middle Ages from around 1000 in Europe.

In Anglo-American usage, enamel painting is probably not necessarily linked to enamel paints based on glass powder. Other weather-resistant paints used to paint posters, signs and other objects that have to stand outside buildings in the open air or are exposed to considerable temperature fluctuations (e.g. beverage cans in refrigerators) are also counted as enamel painting. These paints dry normally at room temperature.

The historically specified enamel paints (vitreous enamel) are those consisting of finely ground glass powder mixed with colour pigments, suitable binders and water and stirred to form a brushable or paintable, more or less thin, creamy paste. The artist can then use these enamel paints to paint the desired image on the glass (e.g. on glass fonts or glass shades of kerosene/paraffin lamps). After drying, the painted glass piece is fired at relatively low temperatures (500-580°C).

The fired enamel colours bond with the glass surface and are thus almost completely insensitive to external influences. They can be cleaned very easily without the risk of smudging the colour layer.

Depending on the consistency of the mixed enamel paints, layers of different thickness can be applied. Pasty (= thick) enamel paints produce quite pasty, raised-looking brushstrokes. Thin enamel paints are used to achieve flatly distributed colours similar to porcelain painting.

If, on the other hand, the glass is painted with other paints that are not fired later, you get sensitive colour surfaces that can be smudged, wiped away, scratched and otherwise damaged if not handled properly. 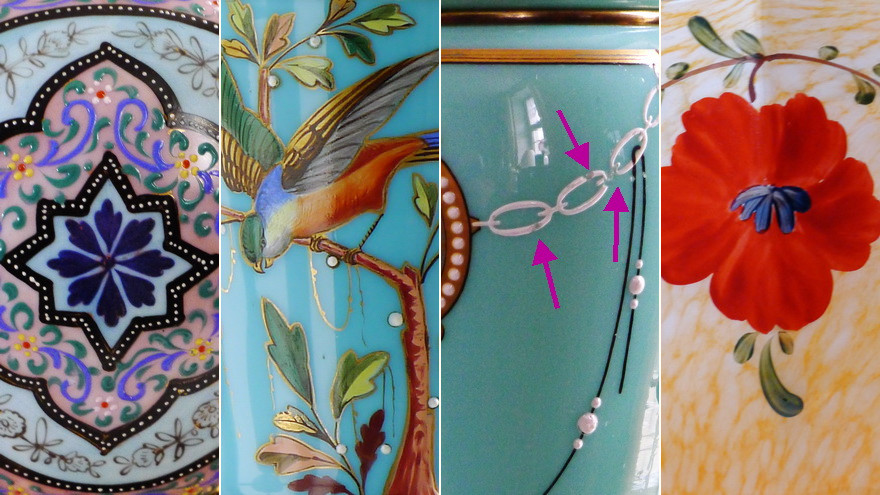 The French word "cloisonné" comes from "cloison", which means partition wall. This indicates in a generally understandable way that the individual colour fields are separated from each other by partitions lying between them. The French term cloisonné has become completely accepted in Western countries, including Anglo-American ones.

The technique of cloisonné can be briefly explained here:

1. First, a drawing of the motif is made on a metal surface that is as smooth as possible (usually made of sheet copper), where the dividing lines of the individual colour fields can be clearly seen.

2. In a second step, flat-rolled, thin copper or brass wires, maximum 3 mm wide, are bent with suitable pliers into the shapes of the dividing lines and soldered onto the metal surface. This creates the so-called cells, which follow the sketched drawing.

3. The third step is then to fill these cells with the enamel colours specified by the artist. With thick enamel colours, which are used next to each other in the same cell, charming colour transitions can be achieved.

4. In the fourth step, the painted object is fired at temperatures of 750-800°C. This causes the glass mixture to melt and bond with the metal surface as well as with the colour pigments. The result is a more or less homogeneously coloured, glass-hard surface that is insensitive to chemicals.

5. In the penultimate step, the surface is smoothed and polished by fine grinding.

6. In the final step, the visible metallic dividing lines are gold-plated to protect them from tarnishing.

The metallic dividers can be used not only to separate fields with different colours, but also as artistic design elements in fields of the same colour, as their shiny golden colour stands out in a very contrasting way, especially in dark colour fields. Further design possibilities are given by choosing colours that are completely opaque or completely transparent, or even leaving certain cells completely blank without enamel colour. This results in lively surfaces.

Working steps of the cloisonné technique schematically shown: Painting with enamel paints
From left: The cells between the brass bars filled with enamel paint
The surface is ground smooth after firing

Important distinguishing feature of cloisonné: All metallic dividing lines are thin, and have the same thickness. They only appear as shiny golden (if well cleaned and not tarnished), thin lines. 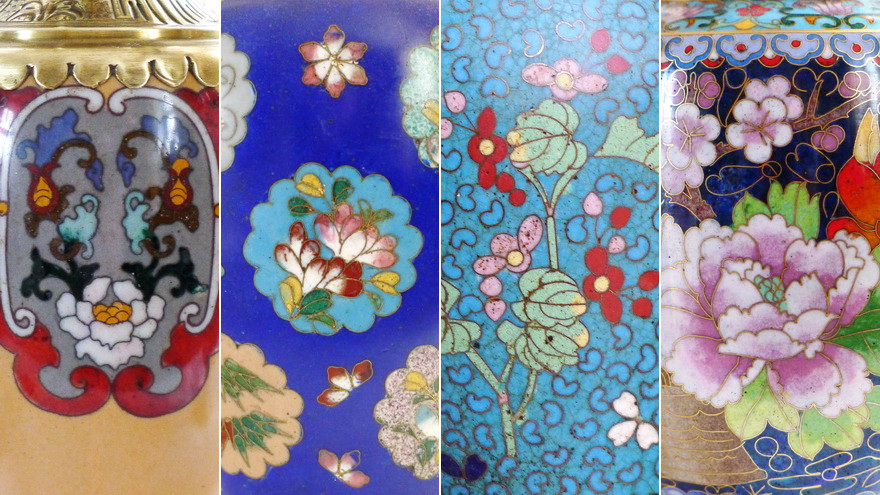 Via the Islamic countries, the European cloisonné technique also reached China from around the 14th century, where it matured to an artistic peak in the middle of the 15th century. The adoption of this sophisticated technique by Japanese artists happened very late, only from the middle of the 19th century onwards, but within a few decades it reached its highest level of craftsmanship and artistic flourishing.

Due to the increasing enthusiasm for Japan in Europe in the last quarter of the 19th century, more and more vases and other art and household objects were imported to Europe from the Far East. The resulting mass production of cloisonné goods led to a decline in the quality of these products from the beginning of the 20th century. The cloisonné vases available in many places today are for the most part products from China, which have gained acceptance in Europe due to their lower price compared to Japanese goods. Most French kerosene/paraffin lamps that have a cloisonné vase are likely to have been made from the Chinese vases.

This French word is composed of two terms: "champ" means field and "levé" means raised. Champlevé then literally means raised field. Thus the word champlevé does not build a meaningful connection to the actual champlevé technique in the first glimpse, because the enamel colours are filled into lower areas of the metal surface. I will come back to this later.

In the champlevé technique, too, the colours are separated from each other by partitions. However, you don't have to build these walls by soldering metal bars to the surface. Instead, the areas that are later to receive an enamel colour are excavated in the actual metal surface by removing precisely these areas predetermined by the artist from the metal surface to a certain depth by engraving, scraping or chemical etching. This creates deeper fields that now function as the cells for enamel colours. The leftover edges of these pits now form the partitions between these cells.

The partitions thus formed can be of quite different, even irregular thicknesses in champlevé technique, as they are not made of thin, flat-rolled wires, but are leftover parts of the original metal surface. As a result, they take on a more dominant, creative function between the individual colour fields. There are even partitions that have been left quite wide (approx. 2-5 mm thick), which are decorated with additional engraved lines. Leaving entire sections (e.g. human figures) in a raised form, which contrast with their shiny golden metallic surface against the surrounding colour fields, also creates an attractive interplay. These exposed metal surfaces can in turn be completed with engraved lines. The French term champlevé refers to these raised parts of the metal surface, which, in contrast to the lowered pits, represent a higher platform.

The other operations are identical to those of cloisonné: the lower-lying fields are filled with appropriate enamel colours, fired and then ground smooth, polished and gilded.

Working steps of the champlevé technique shown schematically: Excavating the fields for the paints
From left: The metal surface still untouched
The metal surface with excavated fields and partitions of different thicknesses

Important distinguishing feature of champlevé: The metallic parting lines are much wider and also often more irregular than in cloisonné. They appear as thicker, irregular lines that bear no resemblance to the thin metallic lines of the cloisonné technique. 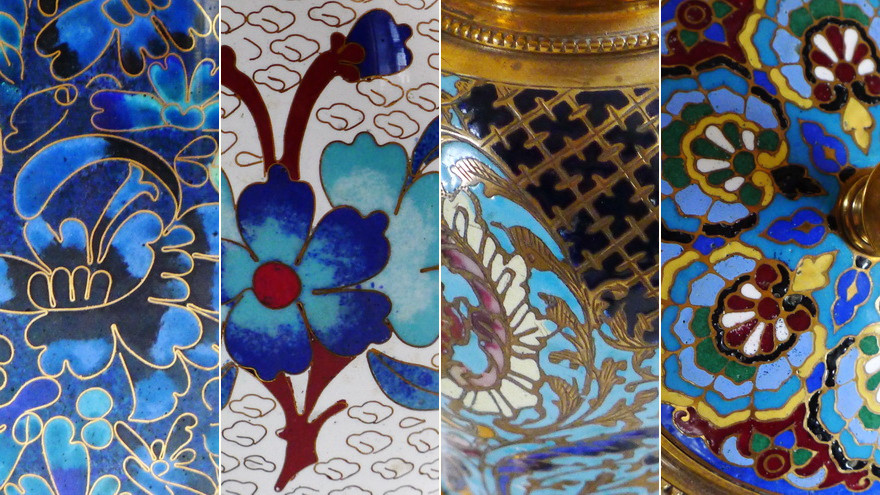 Examples of the visual differences between the two techniques in close-ups
From left: Two cloisonné surfaces – Two champlevé surfaces

The champlevé technique is also a very old technique that is completely indigenous to Europe again and was used for the artistic treatment of the selected metal objects. Beautiful Celtic metalwork is already known from pre-Christian times, around the 3rd to 2nd century BC, in which dark red enamel colours were applied to bronze cult and jewellery objects.

The actual heyday of the champlevé technique did not come until the Middle Ages in Romanesque art from about the 11th century onwards. In certain regions (Belgium, Cologne and the surrounding area, the Netherlands, Limoges in France, Spain), first-class objects of art were created in the champlevé technique.

Unlike the cloisonné technique, the champlevé technique did not make the leap to China and Japan. It has remained a purely European craft to this day. Around 1900, some French kerosene/paraffinlamps were refined with Champlevé technique. As this technique is very labour-intensive in manual production, the lamps made with it are quite small. Lamps with smaller metal parts painted in the champlevé technique (small columns, base sections, etc.) as decorative elements then became more widespread. 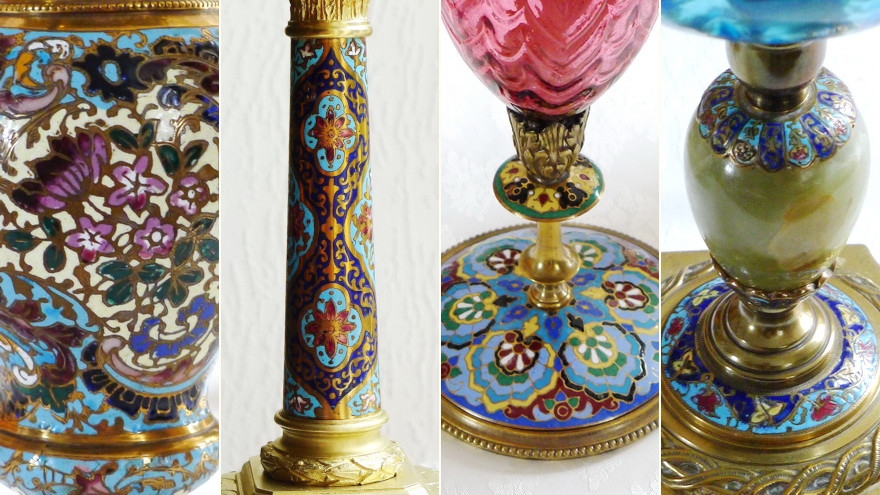