Japanese porcelain manufacturing began in the 17th century in the city of Arita on Kyushu Island (the southernmost island of Japan) when kaolin was discovered there in 1616. The high-quality porcelain was in great demand at the European courts and was exported to Europe in large quantities between the second half of the 17th century and the first half of the 18th century. The port from which the ships brought the porcelain to Europe was called Imari, which eventually gave this porcelain its European-Western name.

Exports to Europe began when the Chinese porcelain center in Jingdezhen was forced to abandon porcelain production due to political unrest in the mid-17th century. In this early export period, in addition to plain blue and white porcelain, colourfully painted porcelain was also produced, the highest quality examples of which were Kakiemon porcelains. During this period, a painting technique called "kinrande" was developed (cobalt-blue colour in underglaze, red and gold in overglaze), which determined the typical colour appearance of Imari porcelains in Europe. The richer coloured Kakiemon porcelains were so popular that the first European porcelain manufactories such as Meissen copied these porcelain decorations. 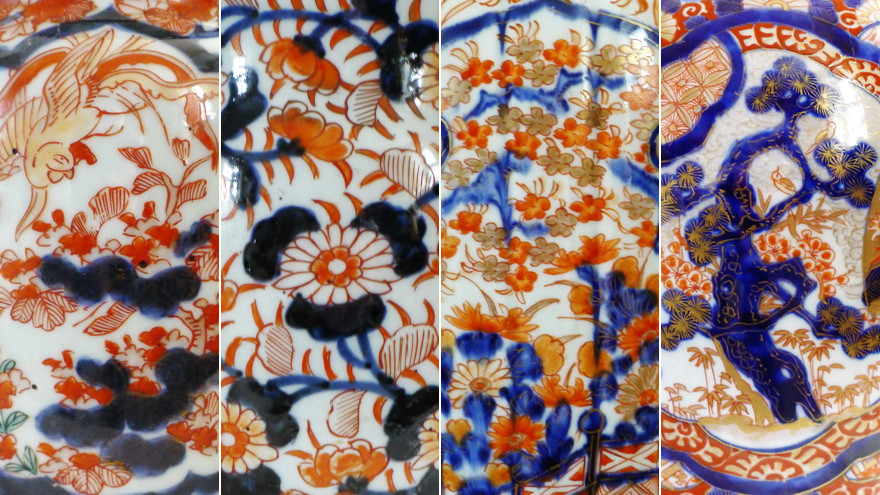 After Chinese porcelain production got going again from the middle of the 18th century and began to export, Arita lost the export business to Europe because Japanese production costs were higher than Chinese ones. In the meantime, however, Imari porcelain had such a high reputation in Europe that Chinese producers were forced to imitate Imari porcelain.

It was not until the second half of the 19th century, when Japonism caused a furore in Europe, that Japanese Imari porcelain was exported to Europe again. Towards the end of the 19th century, kerosene/paraffin lamps were made in France from Imari porcelain vases with decorations mainly in the three colours mentioned above (cobalt blue, ochre red and gold in kinrande technique). In Great Britain, very luxurious lamps were made of porcelain that imitated Imari colours and painting techniques.

Satsuma pottery is a generic term for a type of Japanese ceramic ware that was a regular export hit on European (mainly French) markets towards the end of the 19th century.

This type of pottery owes its name to the old Japanese province of Satsuma on the island of Kyushu (the southernmost island of Japan), where a number of pottery workshops were founded by Korean pottery artisans who produced goods from glazed earthenware from around 1600 onwards. From the initially very simple utilitarian ceramics, a high-quality art ware painted with different motifs and decorated with gold gradually developed.

When Satsuma's high-quality products were very well received and highly appreciated at the Paris World's Fair in 1867, the success story of Satsuma ceramics began. As European demand increased, Japan began to produce export ware in the same style in other places outside Satsuma. In the 1890s, "Satsuma ware" was produced in more than 20 different places in Japan. Thus, the name "Satsuma" ceased to be an appellation of origin of a regional kind. "Satsuma" became a stylistic feature completely independent of where the goods were made. This was accompanied by an almost complete adaptation of the decoration to European/Western tastes, so that these products had no takers at all on the domestic Japanese market. The complete export orientation and mass production eventually caused a considerable decline in quality, so that from the 1930s onwards, the interest of art lovers and collectors in Satsuma ware largely disappeared.

At the height of the export wave, the typical Satsuma style was a dense juxtaposition of genre scenes and brocade-like interspaces filled with millefiori-like floral and other decorative patterns. The main motifs were religious, mythological, warlike (samurai warriors), but also courtly genre scenes alongside depictions of nature with flowers and birds, all richly decorated in gold. 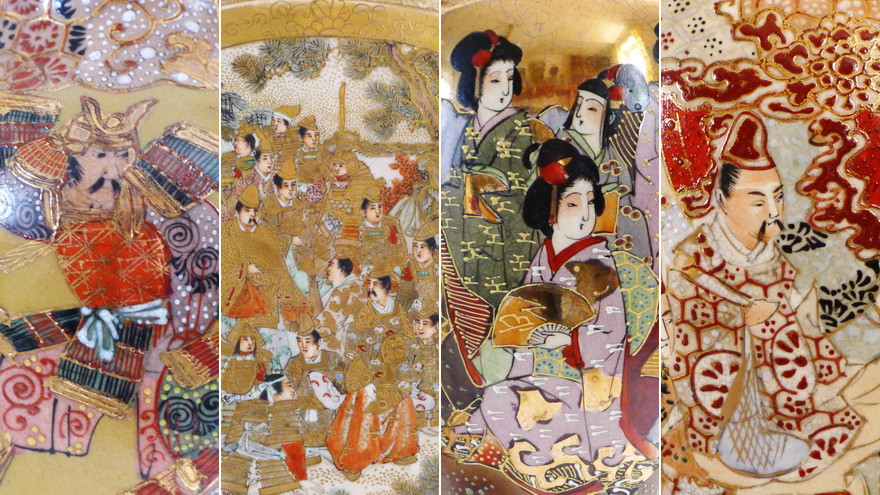 In addition to these typical decorations, which are easily identifiable as "Satsuma ware", the fine to coarsely crackled glaze is another important distinguishing feature of this pottery. However, there are also other paintings with other subjects independent of the brocade style, whose assignment to Satsuma ceramics is not very easy for the layman. 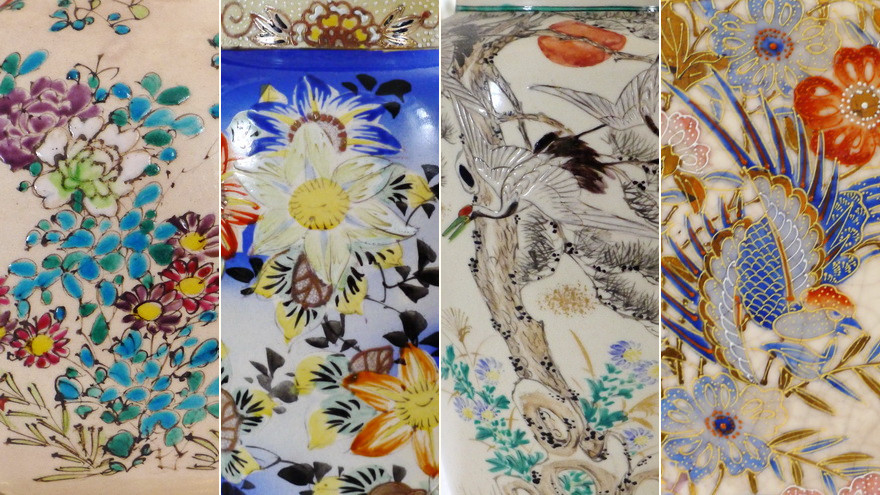 The main export country for Satsuma ware in Europe was France. In the last quarter of the 19th century, Japonism had pretty much conquered the French art world. Beautiful decorative and utility items such as vases, tea sets, jardinieres, small furniture from Japan were very much in fashion. So it is not at all surprising that Japanese vases were also increasingly used for kerosene/paraffin lamps. Initially, regular flower vases were converted into kerosene/paraffin lamps by drilling a hole in the bottom of the vase to connect the necessary metal fittings such as the base and the font with a threaded rod. Later on, lamp vases with a prepared hole in the base were specifically imported.

China is the actual motherland of porcelain production. Objects with porcelain-like mass (vases and vessels made of proto-porcelain, the composition of which already contained kaolin) are already known from the Han dynasty around the birth of Christ. After a long period of experimentation and improvement, the Chinese succeeded at the beginning of the 9th century in achieving firing temperatures of around 1350°C by substantially optimising the kilns. These high temperatures made it possible to produce hard, dense, water-impermeable and slightly translucent porcelains that were not yet colourfully painted but at least glazed.

From the beginning of the 14th century, Chinese porcelains were already decorated with dark blue cobalt paint, which was applied directly to the porcelain surface under the glaze. These porcelains were exported to Europe from the beginning of the 16th century, where they enjoyed great prestige. The hard porcelains painted with dark blue paint on a white background, with their high-gloss, insensitive glaze, aroused the love and enthusiasm of the European courts for Chinese wares. Chinese vases, bowls, plates, jugs, figurative sculptures and other objects made of porcelain with their quite unusual shapes for European tastes and the completely unknown exoticism of their decorations were so popular that they were very quickly elevated to the status of pure collectors' items. The European royal houses competed with each other with their collections. Luxurious rooms were set up in the palaces to display only the porcelains they had collected.

The Chinese porcelain decorations can be very varied and are almost always associated with symbolism, i.e. they are not mere ornamental decorations, but symbolise wishes, hopes, feelings, seasonal occurrences, mystical, mythological and religious content and much more.

The porcelains, which were initially painted only blue and white, gradually acquired more and more colours as colouring pigments were found that could withstand the high firing temperatures. In the 17th century, the so-called "colour families" emerged, in which one specific colour decisively dominated the overall appearance of the decoration. These colour families are defined in the western world by their French names. In the beginning, there were three main colour families: "Famille verte" (green), "Famille jaune" (yellow) and "Famille noire" (black). Somewhat later, from around 1720, a fourth colour, "Famille rose" (pink), was added, the emergence of which is linked to the discovery of gold purple as a usable colour in the Netherlands.

The most important center of Chinese porcelain production is the city of Jingdezhen (Ching-tê Chên) in the south-east of China, as there are large deposits of kaolin in its immediate vicinity. The Chinese were able to keep the composition and manufacturing technique of porcelain secret for a very long time in order to protect their monopoly position for this coveted export product, until Johann Böttger succeeded in producing European hard porcelain in Saxony in 1708.

Chinese porcelain vases were used in the 19th century to make French Moderator oil lamps by sawing off the bottom so that the Moderator technique could be inserted into the vase. Later, when kerosene/paraffin lamps had long since become established, porcelain pieces specially produced for lamps were imported from China, but their painting lacks the high quality of the early pieces. These Chinese porcelain vases, together with Imari and Satsuma wares from Japan and cloisonné vases from China, reflect the great enthusiasm of the French for Far Eastern wares in the late 19th century. 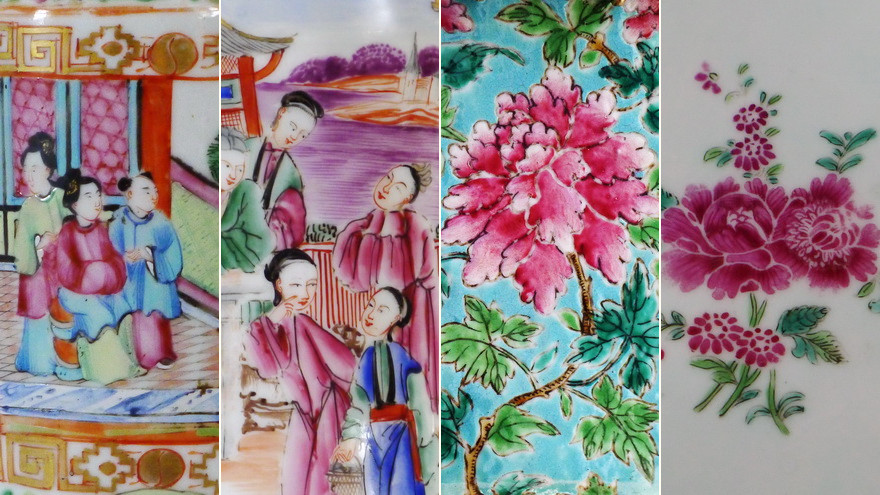