Use of Natural Stones in Kerosene/Paraffin Lamps

Natural stones such as marble, alabaster, serpentine, etc. were occasionally used in high-end lamps as base and column materials. As their extraction and processing is often laborious, yet their appearance is stately, natural stones were more likely to be used in prestigious, expensive lamps as design elements.

Marble, alabaster and onyx marble are the most frequently encountered natural stones in kerosene/paraffin lamps. Serpentine and clay slate follow at some distance. Other, consistently well-suited natural stones such as granite or soapstone hardly occur (or I have not been able to discover them so far).

I will try here to briefly describe the rock types relevant to us and also indicate their most important distinguishing features for us collectors.

Marble is, in a chemical sense, a naturally occurring calcium carbonate. There are large deposits of marble in the world. They are mainly formed by the transformation of limestone and other carbonate-rich rocks under high pressure and temperature. As a result of this metamorphosis, which took place in the earth's interior, fine to coarse crystalline marbles were formed from the original rocks. Due to the presence of impurities with other rock layers of different colours, marbles acquired a fine to very vivid pattern, which was the reason for their great popularity in all cultures of mankind.

Partly due to ignorance, partly due to tradition, other stones similar to the actual marble are often also called marble, although they have a completely different chemical-mineralogical composition. Limestones, travertines, onyx marbles and Jura marbles are actually not marbles.

The white marbles are slightly translucent. In this property they are similar to alabaster, which has a higher translucency is considerably higher. Marble, namely calcium carbonate, is insoluble in water but dissolves in acids! Even weak acids such as acetic acid (contained in commercial vinegar), citric acid (a component of citrus fruits) and other fruit acids react with the marble surface and leave matt marks.

Coloured, especially attractively patterned and banded marbles were popular for use as columns and plinths in high-quality lamps.

This somewhat misleading name for certain limestones is derived from the vividly banded appearance of these rocks. Onyx marble is formed by the precipitation of very fine particles of limestone from spring water or fresh water in underground cavities in very calcareous areas. In this process of sintering, compaction and rock formation, metamorphic transformations under pressure and temperature play no role at all. Therefore, the so-called onyx marbles are not to be counted as marbles at all.

The one important characteristic of onyx marble is its fine banding due to the different coloured minerals that have been deposited in fine sedimentary layers on limestone layers. This results in thin lines of contrasting colours that create an attractive picture. The green-coloured or green-banded onyx marbles are very sought-after and were often used as lamp parts.

The name component "onyx" comes from a completely different mineral, a very vividly black/white banded quartz species called onyx, which is chemically-mineralogically related to agate. The great similarity of banding patterns with onyx and their more marble-like colours led to the designation “onyx marble” for these sintered limestones, although they are neither marble nor onyx.

Onyx marbles also consist mainly of calcium carbonate molecules and are therefore (like the real marbles) very sensitive to acid.

Alabaster is chemically a naturally occurring, microcrystalline calcium sulphate (gypsum) whose crystals have also incorporated water. The formation of alabaster is due to the slow evaporation of salty waters, where the formed gypsum crystals have built up large sedimentary layers over time. In this respect, alabaster is similar to onyx marble, with the difference that the latter rock formed in fresh water, whereas alabaster was formed in salt water. There are alabaster deposits in white, grey, light brown to reddish colours.

Alabaster has a great visual resemblance to white or light greyish-yellow coloured marble, which leads to confusion among uninformed people. Compared to marble, alabaster is much softer and can be easily scratched. Its translucency is also much higher; thin edges of alabaster slabs can be downright translucent. For this reason, even lampshades are made of thin alabaster. Due to the slight translucency, well-polished alabaster surfaces appear almost somewhat "specky".

Because of its softness, alabaster can be easily worked and for this reason was used to make lamp parts such as bases or columns. Many smaller column sections of French and German lamps are made of alabaster (and not marble, as is sometimes claimed). I even have a lamp (L.190) whose alabaster vase has decoratively carved sculptural flowers.

In contrast to calcium carbonate, calcium sulphate is soluble in water up to 2%. Its sensitivity to acids is just as high as that of marble. Dirty alabaster parts of a lamp should therefore not be cleaned with commercial washing-up liquids or even with acidic cleaning agents; this would dissolve the surface of the stone. It is better to grind the dirty surface with a fine abrasive and polish the resulting clean but completely matt surface with suitable polishing agents. 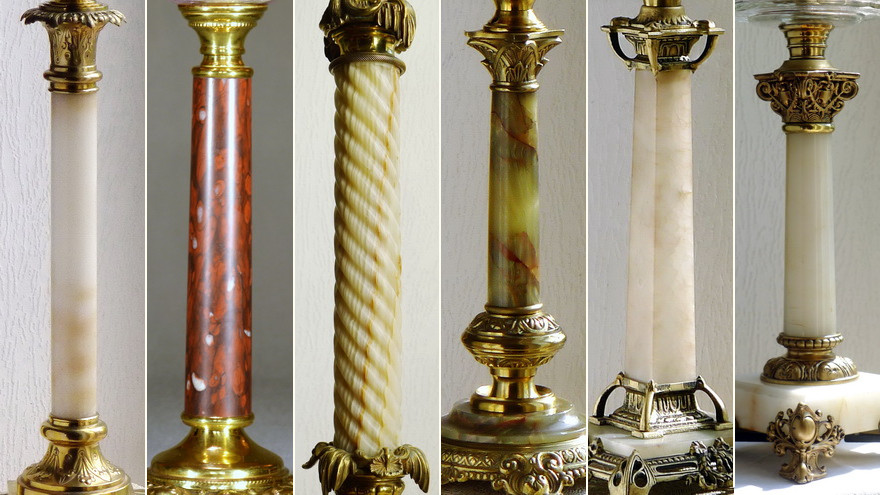 Serpentine is the collective name for certain layered silicates with a relatively low hardness. This mineral occurs in nature mostly in dark olive-green shades, but other colours such as yellow, brown, red, grey and black can also occur. In a highly polished state, serpentines can hardly be distinguished from similarly coloured and banded marbles by the layman. For this reason, lamp parts made of serpentine are also succinctly referred to as marble.

To my knowledge, serpentine was the preferred type of stone of Wild & Wessel for the base sections of their lamps. Based on this knowledge and two W&W lamps with stone bases in my collection, I am (supposedly) able to distinguish blackish serpentine from corresponding, similar-looking marbles. But I openly admit that I am a layman and my classification can be wrong.

A reasonably accurate distinguishing feature may be that the "marbling" of serpentine tends to occur with rounded, circular, small spots, whereas with marble it appears more in elongated bands. In the next photo I have collected all the blackish-dark serpentine and marble bases from my collection as illustrative material. 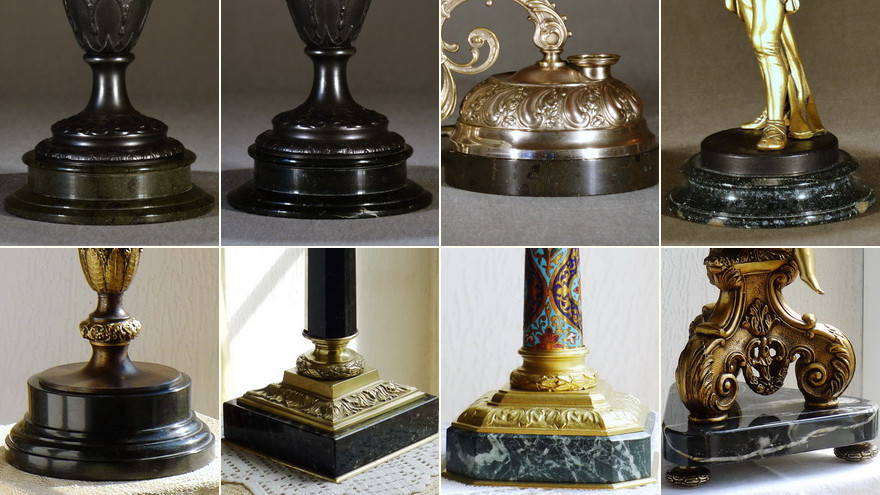 Who does not know them, the grey-black slates as roofing of many old houses? Due to their very easy cleavage and water-repellent properties, slate has been used for centuries in the form of thin slabs as rain protection on roofs and also on the facades of buildings.

Slate is in itself a collective term for different sedimentary rocks whose common feature is their very easy splitting into thin layers. These fissile surfaces are mostly formed by tectonic shifting and deformation of the sedimentary rock layers in the earth's interior.

When layers of slate become more compacted due to much stronger pressure and high temperatures in deeper regions of the earth's crust, clay slate is formed. This is the actual type of slate that roofers preferred to use. Clay slate often has a black-grey or even just grey colour. It is also soft and can be easily ground.

Several lamps by R. Ditmar in Vienna have round or triangular bases made of slate. These base stones are usually relatively thin (height 1.5 to 3 cm) and without exception glossy black lacquered, because the actual slate surface looks rather unattractive with its matt grey colour and can hardly be polished due to its softness. Since the underside is usually not lacquered, slate can be easily recognised by the grey, often scratched underside of the base. 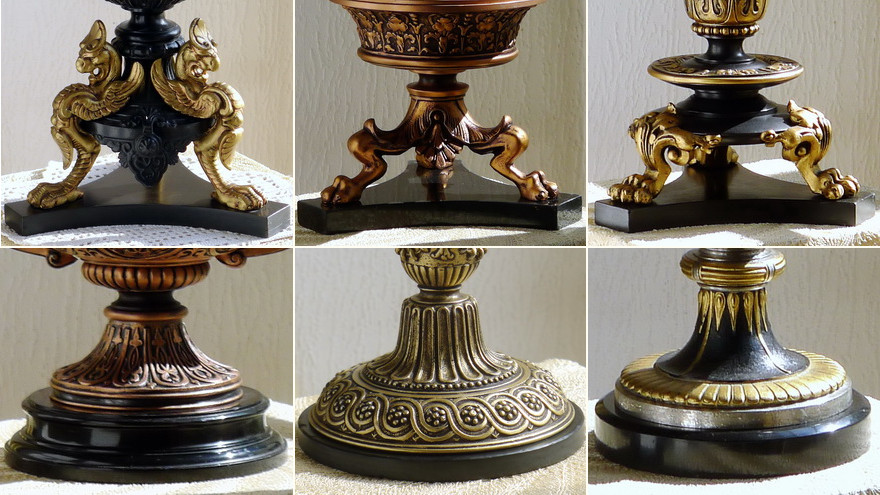