Since the flame of a flat burner did not yet spread much light, an English company, Hinks & Son in Birmingham, realised the idea of having two flat wicks, each 1 inch wide (approx. 26 mm), burning parallel to each other in a burner around 1865. These special flat burners with two parallel wicks are called duplex burners. This parallel arrangement of two wicks in one and the same burner had three serious advantages over a simple flat burner: a) it was possible to burn two wicks instead of one, thus virtually doubling the total wick width without having to double the size of the burner; b) two parallel wicks now also gave off more light on their narrow side; c) it was also possible to burn only one wick if one wanted to, when not much light was needed. Since both wicks are adjusted with two separate wick knobs, the height of their flames can be regulated independently. The cap of the duplex burner has two flat, separate slots at the top from which the two flat flames rise. The middle part of the cap between these two slots is called the "bridge" for simplicity's sake. 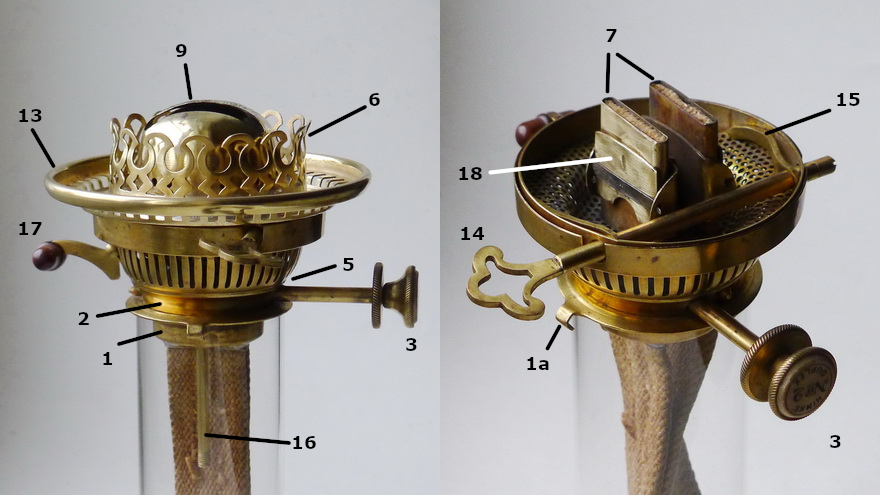 English duplex burner (here Duplex No.2 of Hinks & Son with raiser and extinguisher)
Left: The burner complete with its cap
Right: The burner without gallery and cap

Explanation to the photo:

This invention was so successful that almost all lamps in Great Britain were equipped with such burners from then until the 1930-40s. The duplex burner was available from various British (or even German, Belgian and Austrian) manufacturers only in the most common size of 39.5 mm threaded or plug-in dimension. Two British manufacturers (Hinks & Son and R. Evered & Son) have also introduced a much smaller version for small lamps, called Bijou duplex because of its small size. Bijou duplex burners use two wicks, each half-inch wide (approx. 13 mm). 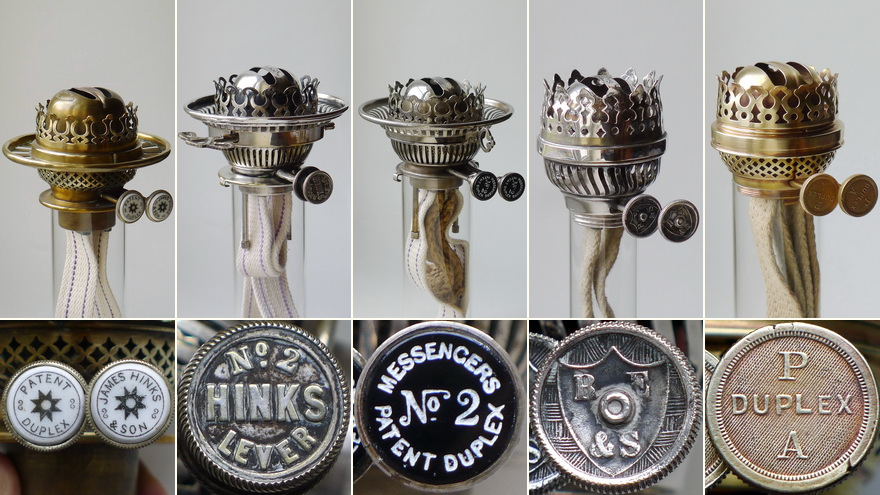 A peculiarity of British duplex burners is the way they are attached to the collar of the lamp. Instead of a collar with an internal thread, bayonet collars without threads are very often used, but with two bayonet bars attached to the sides. The burner then has two lateral claws at the lower end which engage in these bars and thus fix the burner to the collar. This special type of fastening is also an invention of Hinks & Son. This innovative English company was well aware of its importance for the British lamp industry. The burners were accordingly marked with the company name both on their wick knobs and on the bridge of their caps. The bayonet collars were also marked accordingly.

The Duplex burners from Hinks & Son are made of high-quality, thick sheet brass and were probably quite expensive in their day, in keeping with their high quality. In order to capture more market share, Hinks & Son developed a somewhat cheaper version, which they called "Duplex 2nd Quality" at the very beginning. However, the marketing left a lot to be desired with this somewhat derogatory name, so they quickly made it "Duplex No. 2", which sounded more like a further development and thus suggested something positive. Now this version was the most sold duplex burner! This market success is still easy to understand today: The majority of duplex burners offered for sale on eBay portals are the No. 2 from Hinks & Son! Despite their frequency, these burners still fetch astonishingly high prices. Here is a brief outline of the innovative power of this company:

1861: First glass chimney with an oval bulge (still for the normal simplex flat burner with one wick)
1865: Duplex burner
1873: Bayonet connection
1878: Two concentric wick wheel axles inside each other
Still before 1880: Extinguisher
1880: Side opening on the basket for inserting a match
1882: Gallery raiser, earlier version

Hinks & Son not only dominated the British market with their steady development of the duplex burner, but also paved the way for safe handling of kerosene/paraffin lamps worldwide with the introduction of flame extinguisher and gallery raiser systems.

The idea of the duplex burner with two parallel wicks was also taken up in other countries. German, Austrian and Belgian manufacturers designed such burners, but only with threaded connections and only with the usual one-inch wicks. They were thus very comparable to the British duplex burners with threaded fittings.

The American burner manufacturers also brought duplex burners onto the market. However, these differed from the European duplex burners in size. Both their thread size (46 mm) and their wick widths (29-33 mm) are larger; probably corresponding to the also larger American-style lamps in which they were used.

At some point there were also burners with 3 flat wicks coming out of three slots arranged like the sides of a triangle and regulated by three separate wick wheels ("Triplex burners"). These burners were large and could not be used in just any fonts; they were not interchangeable with the usual burners; they also needed correspondingly large, almost oversized glass chimneys and they were probably also quite expensive. For these reasons, they could not establish themselves on the market; they are correspondingly rare and very expensive today.