Flat burners use a flat wick that comes out of an elongated slot at the top of the flat wick tube and burns with a flat flame according to its shape. It is obvious that the flame only experiences a draft from both sides but not from below. Because of the flat design of the wick, the flame can only be flat; consequently it gives off more light on both broad sides and very little on the narrow ends.

This type of burner was very common in the first kerosene/paraffin lamps. It is not entirely agreed whether the flat burners for kerosene/paraffin were first used in Vienna or in the USA. It is generally assumed that the Viennese company R. Ditmar started producing these burners around 1855 (for colza oil), and that the US American manufacturers copied the design of the Viennese burner shortly afterwards. However, there is no irrefutable evidence to support this assumption. After all, it is known that R. Ditmar manufactured his burner in large quantities and also exported it, which is why it is known today worldwide as the Viennese flat burner. There were also flat burners from Germany, which differ slightly in appearance from the Viennese burners. They are called Berlin flat burners. The Viennese flat burners were offered in sizes of 3, 5, 8 and 11 lines, while the Berlin flat burners in 3, 5, 7 and 10 lines. Later there were also larger, 14 and 15 line flat burners.

The most important components of a flat burner are - as explained schematically in the chapter Kerosene/Paraffin Burners - the burner basket, which is firmly connected to the burner thread at the bottom, the burner gallery for holding the glass chimney, the rectangular-flat wick tube inside and the dome-like cap. The basket cannot be unscrewed from the wick tube; it is firmly connected to the wick knob ring. This is why the flat burners do not have a basket thread on the inside of the wick tube. The conical walls of the basket are mostly concave, i.e. slightly curved inwards. The cap has an elongated slot in the upper area from which the flame of the burner comes out. The wick tube ends inside the cap a little below the cap slot. Inside the cap, freshly flown air and warm kerosene/paraffin vapours mix together to form a more flammable medium. In addition to the flat burners with a thread, there are also other flat burners that do not have a thread and are simply plugged into a suitable collar, or others with bayonet connections.

With the Viennese flat burners, the burner gallery consists of a brass sheet cut straight at the top, which is separated into four segments by vertical slots and is therefore designed to be somewhat more flexible. In the case of the Berlin flat burners, on the other hand, the gallery consists of a series of easily bendable prongs. The basket and gallery are very often one unit, as the two parts were firmly joined together by machine or produced from one piece of brass sheet.

The wick knob is attached to the lower part of the basket with a horizontal axis. This axis is provided with 2-3 gears inside the basket that protrude into the wick. The wick knob almost always bears the mark or logo of the company that manufactured the burner. Old flat burners intended for mass production were even partly made of iron instead of brass. 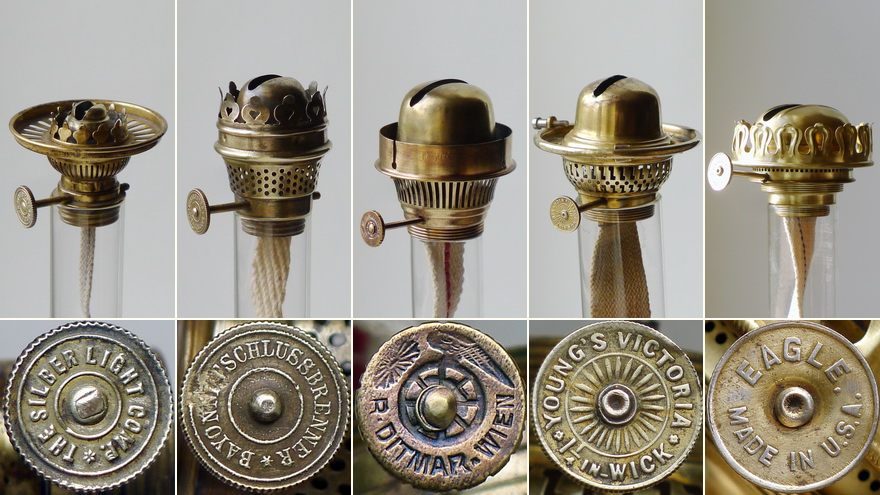 In the initial phase of the kerosene/paraffin era, all lamp manufacturers equipped their lamps with flat burners. In addition to the Viennese flat burner, which dominated the market, there were also flat burners in Belgium (from Lempereur & Bernard), Great Britain (Hinks & Son; Young; and others) and in the USA (Edward Miller; Plume & Atwood; and others), each with different wick widths and thread sizes. The simple flat burner with only one wick was later called the “simplex burner” in Great Britain based on the duplex burner with two wicks. In Germany, the Berlin flat burner was mainly used.