Round burners use a "round" wick instead of a flat wick, you would logically think. The answer is yes and no. This type of burner also uses a flat wick, but it is folded into a hollow, round wick in the upper part of the burner. A much wider flat wick is thus turned into a round wick inside the burner. The reason for this design is that there was a strong need to increase the light output of the flat burners even more, but the burner would become too large and unwieldy with the necessarily much larger wick width. Moreover, the round wick made it possible to supply additional air to the inside of the flame (see Argand’s Oil Lamp). This gave the round burners the desired higher light output compared to the simple flat burner, without having to design the burner much larger. About 10 years after the market introduction of the flat burner, the first round burner with this new type of wick rounding in the burner itself was introduced in 1865 by the Berlin company Wild & Wessel (see below, The Kosmos Burner).

This idea then marked the beginning of the triumphant advance of round burners, which gradually pushed the flat burners that had been common until then out of the market. However, this only happened on the European continent. Great Britain, in fact, remained forever faithful to the duplex flat burners, which, amazingly, also came onto the market in 1865. In the USA, flat burners continued to rule for a long time.

The round burner is very different in appearance from the flat burner. The walls of the burner basket are very often curved outwards, i.e. convex, although there are also round burners that have retained the concave basket shape of the flat burner. Here, too, there is the gallery at the top of the basket with the easily bendable prongs. The basket is ornamentally perforated or slit several times to ensure the air supply to the inside of the burner. The basket and gallery are very often one unit, as the two parts were firmly joined together by machine. Usually they are removable from the rest of the burner by unscrewing. The round burner does not have a cap like the flat burners.

The actually essential part of the round burner is the round wick tube in which the flat wick rises upwards and is rounded in the process to form a completely tubular wick at the upper end. The wick tube consists of two concentric conical tubes inserted into each other, which taper slightly towards the top. The wick is placed between the outer and inner walls and it can be moved up or down with a wick knob. The wick width and the upper diameter of the wick tube are matched so that the two wick edges meet at the top and form a tube without a void between the wick edges. Through the larger, often triangular shaped opening at the bottom, air enters the inside of the wick tube and flows upwards to supply the flame with sufficient air from the inside. At the lower end of the wick tube is the wick knob ring, which is threaded at the top and bottom (the basket thread at the top to screw the basket to it, and the burner thread at the bottom to screw the burner into the collar of the lamp). 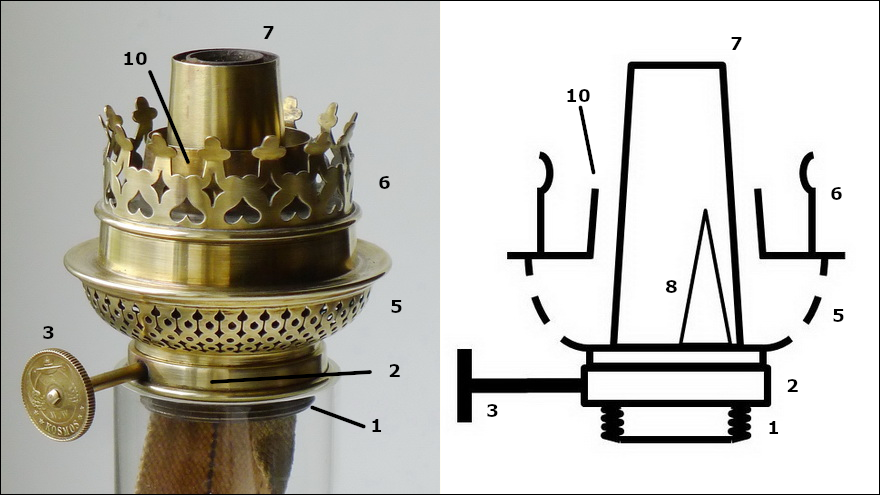 Explanation for the photo:

The basket and the gallery enclose the wick tube; they are screwed onto it at the bottom. This is basically a simple structure, which in this simple form is characteristic of the round kerosene/paraffin lamp burner. A deviation from this construction, which is not immediately noticeable from the outside, is given in the case of center-draft burners, which instead of two tubes tapering conically upwards have two strictly cylindrical tubes, the inner one of which is not part of the burner but of the kerosene/paraffin reservoir. The description of this type of burner is given in the chapter Kerosene/Paraffin Burners – Burners with Central Air-Draft.

Among the kerosene/paraffin round burners, one must distinguish three main types:

The burners of the first type without a flame disc are generally called Kosmos burner, so named by their inventors, the Wild & Wessel company in Berlin. The Kosmos burner is the best-known and by far the most widely produced round burner of all. The producers Emil Wild and Wilhelm Wessel founded a company in Berlin after their apprenticeship years in France and developed and presented the first round burner around 1865. This burner was the first to bend the normal flat wick, which was inserted from below, into a round wick at the top of the wick tube by means of its special design. Its inventors called this burner the "Round Flat Wick Burner".

To clarify: Argand had already constructed a burner much earlier that used a tubular round wick to enable the air supply from below. In his case, however, the wick was braided round from the start (or sewn together to form a tubular wick; I don't know more precisely), so it was not bent round in the burner. In addition, Argand oil burners had to be used with specially designed oil reservoirs, which were attached to the side of the lamp and allowed oil to be fed into the burner via a permanently attached pipe. This arrangement of the separate oil reservoir was necessary to provide the burner with the opening downwards for the air supply to the center of the flame in accordance with the invention. As a result, such burners were firmly connected to the usually metallic oil reservoir and could not be replaced. They were an integral part of the lamp as a whole.

The ingenious invention by Wild and Wessel, on the other hand, made it possible to use any cheaply produced flat wick with a suitable width, which was only formed into a round wick in the upper part of the burner. This had not been done before! And these burners did not need special kerosene/paraffin reservoirs with a dedicated opening at the bottom, because they allowed the internal air supply through a larger, triangular opening at the side of the wick tube. This meant that the Wild & Wessel round burner could be used on any font made of glass, metal or ceramic. This lateral air supply opened up completely new design possibilities for kerosene/paraffin lamps. In English-speaking countries, air supply from the side opening is called "side-draft", as opposed to central air supply from bottom, which is then dubbed "center-draft". 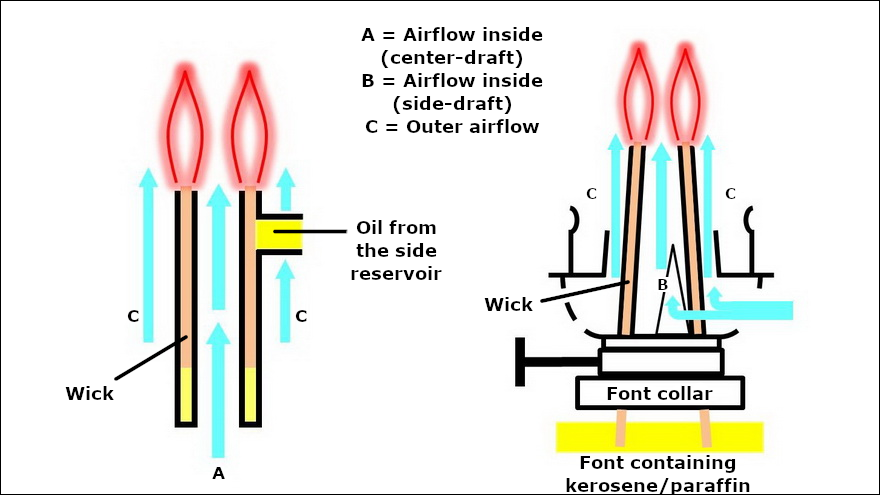 The first round burners of Wild & Wessel had a crescent-shaped slot at the bottom to insert the wick. This slot was not quite circular, but somewhat straight in the middle, because the burner had a long roller to which two wide gear wheels were attached to move the wick up and down. The mechanism was somewhat cumbersome, and the roller with two wide gears interfered with the kerosene/paraffin transport upwards at the points where the roller exerted pressure on the wick. A consequent improvement came when two narrower gears were introduced opposite each other instead of the wide roller. This probably happened around 1869. One year later, a total of 5 years after the launch of their first round burner, Wild and Wessel improved their burner again by equipping it with two double gear wheels to move the wick. Now 4 single gears engaged the wick to make the movement of the wick smoother and easier. They named this final improved form the Kosmos burner. 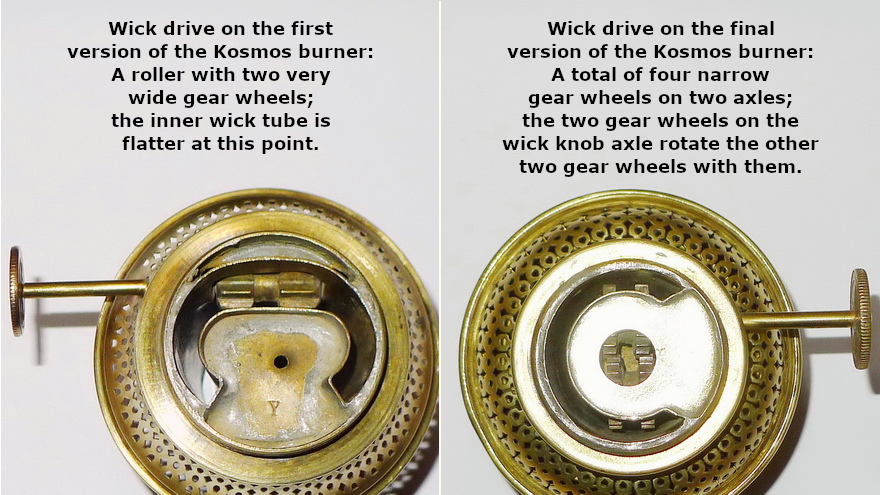 Unfortunately for Wild and Wessel, they were not able to obtain a patent in Germany at the beginning (curiously, they had their patent recognised in France and Great Britain). Thus, this ingenious invention was freely available to all burner manufacturers in Germany, who not only technically copied this burner, but also continued to call it the "Kosmos burner". This type of burner was produced by the millions for decades (basically until today). That is why it is the most widely used kerosene/paraffin burner today (as I said, only on the European continent; the British still produced their duplex burner; the Americans stayed with the simple flat burner for a very long time and later changed to flame disc burners with central air draft).

In the beginning, the initial Kosmos burner had a gallery that could be removed from the basket by unscrewing it. The basket was fixed to the wick knob ring at the bottom. After the wick drive was improved, there were two different Kosmos burners. The first one was a continuation of the initial Kosmos burner with a removable gallery, with a fixed concave basket, but now with four gear wheels. The inventors called this version the Kosmos-Normal burner. This type continued to be built for some time. The second burner, on the other hand, has the now familiar shape with the convex basket, which forms a unit together with the gallery and as such is screwed onto the wick tube. This version was simply called the Kosmos burner.

A special feature of all Wild & Wessel burners is the typical decorative cord pattern on the backs of the wick knobs. When this pattern was introduced is beyond my knowledge. Wild and Wessel also stamped this pattern when the burner was intended for a dealer and therefore did not show the usual W&W logo on the front. In my collection, however, there are also burners that clearly come from W&W but have neither the W&W logo on the front nor the decorative cord pattern on the back. 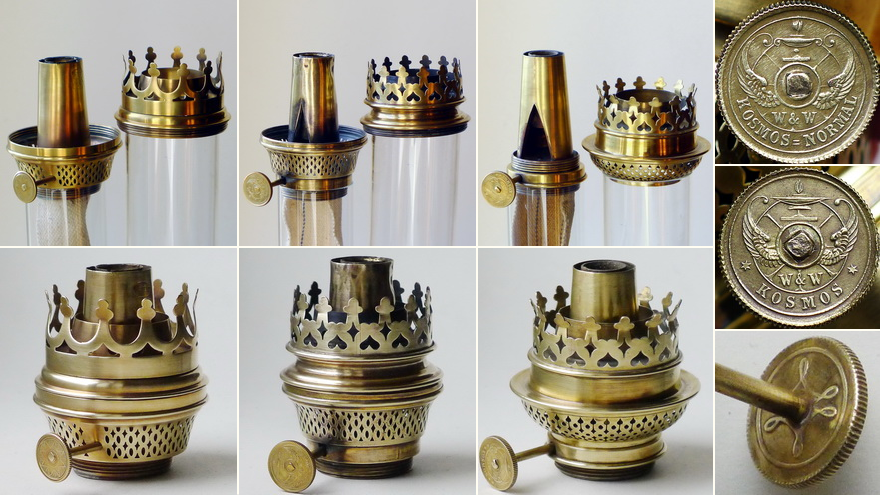 After the great market success of the Kosmos burners, almost all burner manufacturers included this type of burner in their product range. There were very different products in terms of quality; there was a suitable Kosmos burner for every budget. The Gaudard company in Morbier, France, still produces high-quality Kosmos burners up to 14 lines.

R. Ditmar in Vienna also had Kosmos burners in his program from the 1870s onwards, which had a soft transport wick and a burning wick instead of a normal flat wick and were called (translated from German): "Patent transport wick round burner". R. Ditmar had also realised this 2-wick concept in his world-famous Sonnenbrenner (Sun burners).

A very interesting development was the ADA burner by A. Daveluy in France. This Kosmos burner could also be used as a flame disc burner if the special deflector, which was available separately, was installed on the wick tube and the corresponding flame disc was attached. However, you also had to change the glass chimney accordingly. 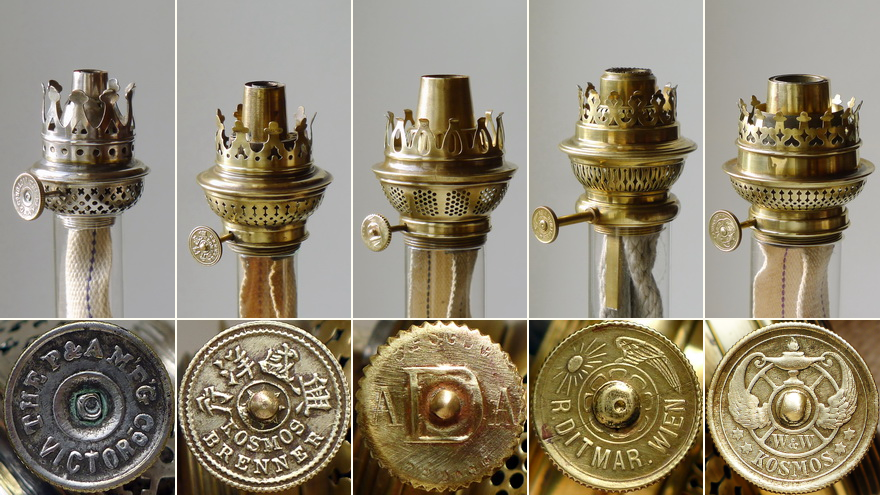 The Kosmos burner was later given a further developed form of inner air supply, which was intended to achieve a further improved brightness of the flame. The inventors were Schuster & Baer in Berlin, who applied for a patent for this burner under the name Patent Reform Kosmos Burner. The difference between this burner and the conventional Kosmos burners is that it has a third, narrow tube in the middle of its wick tube and has several small holes on its wick knob ring. Through these holes, another, a third air stream is now directed from the outside into this narrow, middle tube. By adding more openings in addition to those on the basket, one has made it possible for even more air to flow into the inside of the wick tube. The flame thus gets an additional air supply inside, which is supposed to produce an even brighter flame. Whether this new development actually contributed to a noticeable improvement in flame brightness remains to be seen. Such inventions, which were propagated as very innovative at the time, were certainly much more likely to conquer more market share. 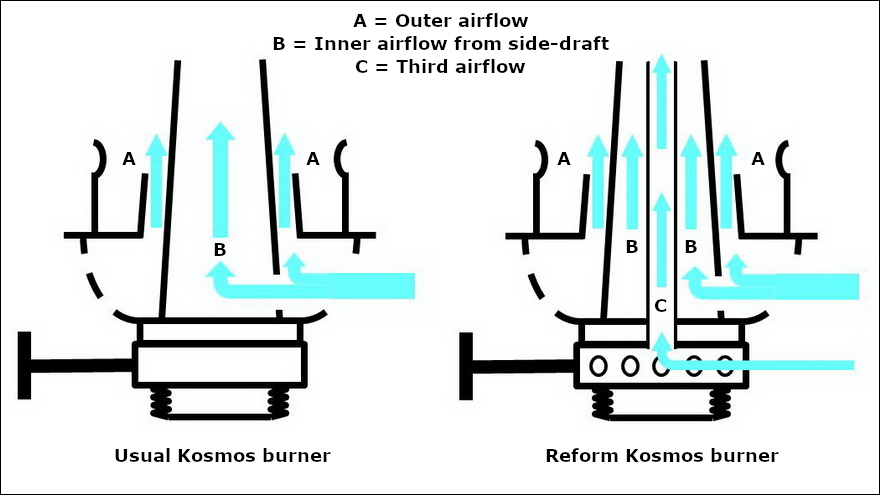 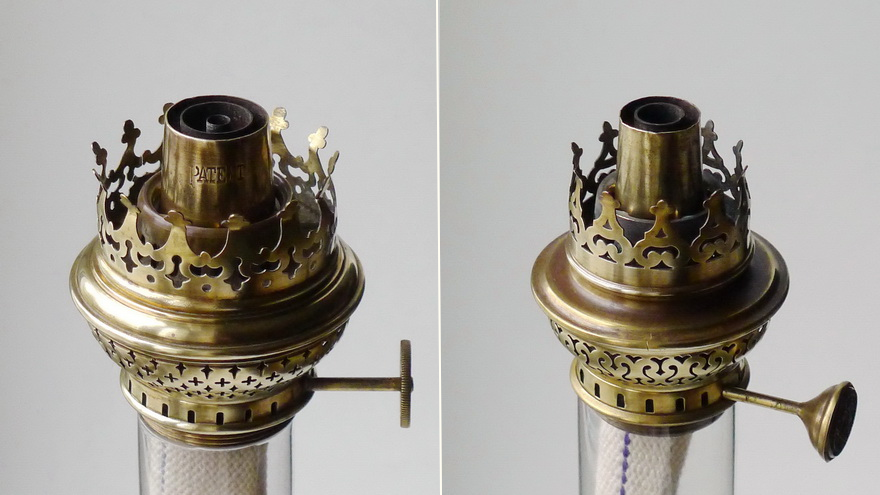